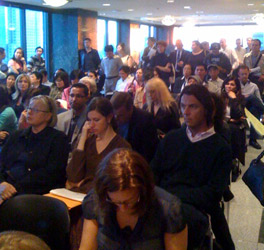 The Florent space wasn't the only big gun to go before Community Board 2's liquor license committee last night. The community, along with the dreaded Soho Alliance, mobilized against three major hotel projects to voice its concern about noise, congestion, and of course, pissing on the sidewalk:

1) Clearly the two big draws of the night were for the New York outpost of the Miami Beach/Lincoln Road Quattro Gastronomia Italiana in the Trump Hotel, as well as the restaurant in The Mondrian Hotel (see below). Two main issues with Trump: traffic and the fact that the members of the project bypassed The SoHo Alliance during their “community outreach” efforts. Bellicose neighborhood figure Sean Sweeney gave them hell for ignoring the Alliance, which is now suing Trump. The reps on Trump’s side said that the restaurant wouldn’t really make traffic worse and proposed installing a bird’s eye view camera to monitor traffic and stream live video online.

One of the presenters said that Quattro’s menu represented an “upgrade” for New York restaurants/menus, a funny moment for those who have been been to the one in Miami. Although there were many opposed and angry, the ap didn't get laid over, and it will go before the full board later this month.

2) By far the longest and most contentious issue was that of the Mondrian Soho located on 9 Crosby Street and 150 Lafayette. They are proposing a full-service restaurant on the 1st and 2nd floors, as well as a restaurant “garden” that is basically right on Crosby. The presentation started with remarks by Fred Kleisner, CEO of Morgan hotels and a longtime Crosby St. resident. Watching him up there, with his elegant swagger and fancy blue suit (he didn’t forget to bring a pocket square), we were expecting him to deliver Gordon Gekko’s “greed is good” speech, but instead he basically hammered home two points: the hotel is not “nightclub-driven” and is all about “quiet enjoyment.”

He explained that 55% of their clientele is corporate (Microsoft is their top client, for example), and that it’s not all about Hollywood and fashion. It was pretty much all downhill from here, as people began to hammer them on those very points (noise and “carousing”) specifically in reference to the effect the proposed garden will have on Crosby St., which to most critics is “one of the last quiet streets in Manhattan.” After a string of speeches criticizing the garden, the execs had no choice but to agree to several stipulations: 1) No music in the garden, 2) No private parties in the garden, 3) Restricted access to Crosby (only for hotel guests) at all times, going both in and out, and 4) an 11 pm closing time in the garden. They agreed on the conservative conditions with the guarantee that they can bring their case back to the board after they’ve opened for a few months and are in good shape with the community.

3) According to both the board and the three people who came to speak out against the project on 28 7th Ave. So., this space has a long history of having tenants that open as restaurants and end up being rowdy nightclubs. So, even though owner Frederic Touiki came into the meeting having agreed to several stipulations already, the board was skeptical that his sticking points (for a French restaurant) were on having a DJ and having extremely late hours. In the end he went with no DJ and left in the air the hours stipulation, since he had to speak with his brother in Miami. The family has opened restaurants in Paris before.

4) It was unclear whether or not the proposal for a steakhouse on 45 West 8th Street will go to a vote this month, since the rep failed to hand in an architectural drawing of the space/seating arrangement until 90 min after his turn. However they did allow a member on multiple community and co-op boards on 8th St. speak. He was very much in favor.

5) Jane Street Hotel at 507 West Street was the last applicant of the night, though hotly contested. Sean McPherson came in and gave a speech, noting that at the last meeting he had 25 people from the community in support. Can't say it was similar this time, since almost everyone was opposed based on the reasons you'd expect: noise, pissing on the street ("fucking" and "shitting," too, according to one co-op VP), and a threat to children. People specifically took issue with the fact that McPherson is asking for three bars and a cabaret. Most critics were up in arms about the fact that there was a serious problem with communication flow the last time McPherson presented himself, as no one apparently heard about it until this week. Most complaints echoed those against Mondrian and Trump. Chair Ray Lee said it will go forward for a vote at the full board meeting, but the committee urged McPherson to do more community outreach.
— Gabe Ulla
· Florent Space Green Lit to Open as 69 Gansevoort Cafe [~E~]