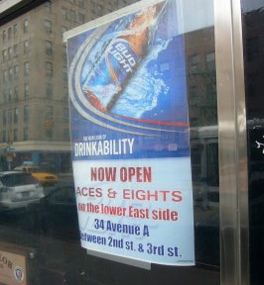 It was a packed house at the 5th St. senior center last night as Community Board 3's SLA Licensing Committee met to deal out the fates of over a dozen restaurateurs seeking upgrades, sidewalk cafes, renewals, and new liquor licenses. One highlight of the night: newcomer Aces and Eights, up for a Review of Method of Operation. Now, Aces and Eights, a fratty Yorkville saloon, won community approval to move into the three level Mo Pitkins space on Ave. A back in February, but they told the board they would be opening and operating as a full service restaurant. Two months in, there's no food, but there is a lot of beer pong.

A number of EVill oldtimers stood up to complain about noise, while the CB members questioned the lack of food in the restaurant, the 13 TVs (they were allowed to have only two), and the advertisements for drinking games. In his defense the owner said food was on the way—though we think it's safe to assume he means wings, nachos, and bar snacks— and that beer pong should not be equated with binge drinking, "It's one pitcher divided into 16 cups!" The peanut gallery had a good laugh, and the committee decided to write a letter to the SLA.

In other news, the new Jewsion restaurant at 1 Essex was sadly denied due to great community opposition. Jesse Hartman withdrew his application for the Isabella's Oven space and will attempt to appease the community, Spitzer's Corner was denied a sidewalk cafe, and plywood vet T-Poutine was denied a new liquor license. Meanwhile Sorella was awarded an upgrade and plans to serve limoncello, grappa, and Campari soon.
· Acrimonious Evening at the CB3 Licensing Committee [The Lo Down]
· All Community Board Coverage [~E~]
[photo credit]