Share All sharing options for: A Beer at... O'Keefe's Bar & Grill 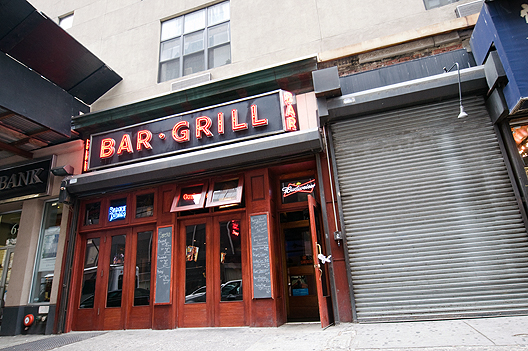 There may be better taverns in New York than O'Keefe's Bar & Grill on Court Street in downtown Brooklyn, but few have better signs. The large red neon "Bar" and "Grill" above the entrance possesses a powerfully anonymous urban iconography rarely seen outside of film. (The only place it says O'Keefe's on the facade is in small, dark letters on the glass doors.) Curiously, though a bar called O'Keefe's has been at 64 Court for 90 years, the sign was not originally theirs. It once hung over a bar called the Savoy at 41st and 9th in Manhattan. "The owner thought it would be the perfect sign" explained a bartender.

O'Keefe's unbeatable location—just steps from Borough Hall—lends it an amazing tidal pull on the working professionals in the area. Come quitting time, the lawyers and politicos and jurors quickly file in, one by one. The place is spacious, deep, clean and airy, which helps to dissipate the claustrophobic effect of the 10 large televisions. Most of these are devoted to sports. But two are diplomatically set on CNN and Fox, so as to present both political persuasions of the folks doing work on nearby Adams Street. On a recent night, Silver-bearded Wolf Blitzer solemnly weighed the threat of the Swine Flu outbreak, while bug-eyed Glenn Beck mocked Obama's first 100 days by holding a swirling red siren aloft.

Most of the seats at the long wooden bar are occupied by 5:30 p.m The two sweet, wholesome-looking young barmaids huddle in their bus station, taking turns making smiling passes through the long room. An older woman sips red wine and reads a book. Three young louts dressed entirely in grey sweats put their feet up. Four blue-shirt-gray-pants defuse over beers. A woman with her child heads to the table furthest back to celebrate a birthday. A limping grifter tries (and fails) to exchange a roll of quarters for a $10 bill. The driver of the B75 parks his bus outside and slowly strolls in to use the restroom. O'Keefe's is an outlet for myriad neighborhood needs. It also has a small reputation for buffalo wings, which can be had for the low price of 40 cents per on Mondays. Apparently, they used to be 30 cents apiece. The economy hits you everywhere.
—Robert Simonson