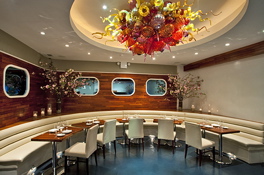 Weeding out the shillers so you don't have to, today we turn our detectors over to newcomers Harbour, Nios, and Comida Mexicana. It gets pretty dicey towards the end, so stick with us:

A commenter on Martini Boys goes a bit over the top on newcomer Harbour:

We're pretty confident that 60% of the Yelp reviews for Comida Mexicana are outright shills. Our favorite:

"I have an aversion to new restaurants -- until they get themselves organized, you might do better with TV dinners. BUT: the new Comida Mexican restaurant in my neighborhood? WHAT A TREAT! The place is charming and extremely well-organized; the servers were friendly & responsive; the food came to the table quickly & was delicious. Everyone at my table had different dishes & everyone was more-than-happy with their size and quality. I'm a fan of enchiladas suizas & , having eaten them in Mexican restaurants all over the City, can say that Comida's are A+. But, having had a taste of Comida, and seen many other interesting dishes on their menu, I'll be returning to Comida to sample Beyond-Enchiladas. Sombreros off to Comida!"
Shill Probability: 85%

And to wrap up, we have a shilling trifecta for the three day-old restaurant Nios. Presented in the order they arrived:

"I went to NIOS last night and saw a tremendous change from the prior District. The lighting was perfect, the staff was exceptional, especially Avelin at the bar and Miguel as my server. The food was spectacular. Good to see some of the same faces, like Patricia and Marissa. Way to go, your restaurant/lounge will be my new after work hangout."
"You are knocking the burgers but it is the best one I have ever had, in fact last night was my second time there. And to everyone that is blogging, go in and try it, instead of making your off the wall comments. In this economy NIOS got it right and in case you didn't research NIOS, it does indeed have a meaning and if you put it together with the Muse hotel and what it stands for, then maybe you can pull your head out of the clouds..."
"Went last night and had a great time. Mood was inviting and the staff was very welcoming. Always a plus. The food was exceptional and the cocktails were fresh and tasty. I will be back."
Shill Probability: 99.99%