One Year In: Elettaria

Share All sharing options for: One Year In: Elettaria 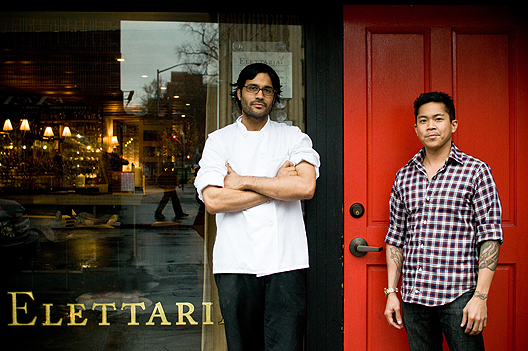 [Krieger, 4/1/09]
Greenwich Village: Elettaria, the project from chef Akhtar Nawab and his business partner Noel Cruz, opened quickly on an unheralded strip of West 8th Street near NYU last March. Serving a fusion menu and some serious drinks in an Allen and Delancey-like space, the restaurant got a mixed bag from the critics, including a tepid onespot from the Brunz. But the restaurant maintained an eclectic clientele, tweaked things here and there, and has now come forward with a bar menu featuring Nawab's take on hot dogs, crab rangoon and pizza. Let's see how she's doing just after her first b-day:

AN: This was a very suspicious street to open a restaurant on any way. It's not really a busy restaurant strip is it? AN: No, it’s not, but that’s good in a way. Has the location been working out for you? NC: It has been. We were jammed in here from the beginning, we were doing really well. As the newness kind of wore off, we stabilized a little bit. But, all in all it’s been very good.

Once all the buzz wore off, did your clientele change at all? AN: To be honest with you, we have a very diverse kind of clientele. I think that’s why we’ve been able to stay busy. A lot of people that came here in the beginning still come here.

And when the critics came, did they come all at once? AN: Onslaught. All of a sudden, everyone's here. It was intense?And, how did you take the reviews? Do you think they understood what you were doing? AN: I think some did. Some didn’t, I guess...We were definitely a little disappointed about the New York Times review, but I guess where you go from there is you step back and say “Ok, well, what can I do to improve?” and “What can be better?” We just focused more on the space, and focused more on the food and the service and tried to make everything the best we could.

What specific things did you change after that? AN: Some of the dishes are different. I mean there are some that are still on from day one, but we added a lot. And, a lot of it was a physical thing. We just diversified the stations a little bit in the kitchen so that everyone’s just more focused on each dish. As far as the background of some of the food, I think we loosened up a little bit. We do a little more Filipino stuff. We have a little fun with that. It’s not quite as tied down.

And any other menu changes that you made over the year just in general? AN: We’re always working one new stuff every week. We don’t change everything every week but there’s always something going through our heads. And how do you know if something’s working or not? Customer feedback? NC: We do get some immediate feedback? especially when we run something special. And some of the things on the menu, we couldn’t take off because people ask for them. Like what? NC: Chicken. Chicken is one. AN: Chicken, of all the things? Crab. We do a dish that's like a congee in a way. It’s a lot more from Noel’s part of the world...We have a lot of fucked up stuff on the menu now. You know, there’s tripe and fermented beans and a torchon we make out of a tendon and a soft poached quail leg.

As for the front of the house, any major tweaks in the last year? NC: In general, we just try to get better, be more efficient, get everybody more knowledgeable about, you know, the product, the food, the service, the beverage program, which we take very seriously as well. There’s a lot of interaction between what goes on at the bar and what goes on in the kitchen.

Since this was the first time opening your own place, were there any stumbling blocks you weren’t expecting? AN: New York City makes it very difficult to open a place and keep it open. NC: There’s always new challenges, new things to learn. AN: I think we’ve screwed everything up so far. Just in general, you know, like every mistake there is to make, I think we’ve made it. What’s an example of a rookie mistake that you wouldn’t make again? NC: Like most places, budgeting. Making sure that all of the costs are right, following all that money. Spending it where you need to and not spending it where you don't need to.

AN: Labor was a big fuck up. We hired the right people we just hired too many of them. We were over budget on some stuff, but we were doing good business. It's natural to think you need more people to accommodate what's happening when in reality you can run more efficiently with less people.

Now a year later, with the recession on everyone's minds, what changes have you made? AN: We haven't altered too much on the menu. I think we were fairly priced from the beginning. Cheap I wouldn't say, but it's in the in-between point. NC: We're more conscious of using companies that will give us great products at fair prices. There are a lot of purveyors out there that we could use and you want to see who's going to give you the best rate whether it's food, whether it's booze, whether it's napkins. And the purveyors are coming down more? NC: Absolutely.

And you have a new bar program. Half priced drinks from 5 - 7? NC: All of our house cocktails, beers on tap, wines by the glass. And we have a small selection of house made bar snacks. I don't know how many months he's been working on a hot dog...AN: I've been working on a hot dog for four months. And now I see Pelaccio's on it. Were you mad when you saw he had a hot dog? AN:No, he's great. We went there for the friends and family and I had it. Anyway, it's a formula, and we've been trying it out and I think it's finally working. We're already serving it. It's $2.50, it's on homemade bread, homemade hot dog, homemade mustard concoction, tomato jam, and we're working on celery salt.

Are you going to expand that menu? AN: We're planning more stuff. We're playing around with a crab Rangoon right now. NC: You know those, with fried cream cheese and imitation crab? AN: But we use real crab, real cream cheese. And we're working on a naan pizza.

Is the bar promotion working? AN: People are coming in to drink and hang out and it's just kind of fun. People want to drink right after work these days more than ever. Some come in and get wrecked from 5 - 7. Does it translate into more dinner customers? NC: People do stay past 7. AN: And we're doing more covers on Fridays and Saturdays than ever before.

In general, does reading about the recession worry you guys? NC: We're very conscious of it. AN: Just because it gets hammered into your head from every outlet. It's a valid point for sure, but people are still going out and eating. They just might not be eating exactly what they were. We get as many covers but the check averages are lower, and sadly people are tipping a little bit less.

So in the next year, where do you want this restaurant to be? NC: We still want to make it better. AN: We're committed to this place and making it as good as it can be. There's always room to improve. No expansion plans in the works, a hot dog cart in the park? AN: People have approached us, but it didn't seem like it was the right time. People in New York? AN: Most of it's been out of New York. But it just doesn't feel right. Maybe the hot dog cart is the right idea.