Share All sharing options for: A Beer At?Smith’s Tavern 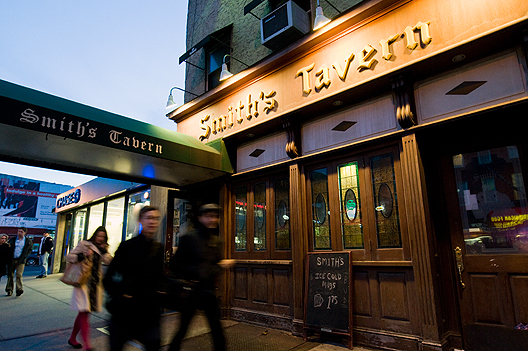 Hate crowds? Tired of chatty bartenders? Then get yourself to Smith’s Tavern, where you will not be bothered with anything that could be called a scene.

I went to this Park Slope bar on a recent Wednesday night and found four televisions, three customers and one beefy barkeep who said not a word to me all evening. This situation did not change, except that the drinkers left one by one. Off night, I thought. So I returned at the primo hour of 10 PM Saturday night. Again: Four televisions, three customers, and one bartender, who was comparatively verbose: he said three words.

This is Smith’s: unfussy, unpopulated, no ceremony. Come in, talk if you like, don’t if you don’t, choose your beer and watch the game. It’s a good place for lone drinkers, who enter, and leave, at regular intervals, usually to partake of Smith’s signature $1.75 Buds in frosted mugs. (These are refreshing, I must admit.) A plaque behind the bar indicates that Smith’s has been declared a “Bud Man’s Bar” by the proper authorities. The jukebox expresses a certain catholic taste in music, as well as a no-nonsense attitude. One CD was titled “Beatle’s Song’s We Find Acceptable” (with that punctuation).

Smith’s Tavern has been in business on Park Slope’s Fifth Avenue and Ninth Street since 1931 and has done a damn fine job of keeping itself out of the news during those 78 years. Go ahead: try to find a write-up of the place. Telling signs of its age include the typical long wooden bar; an actual phone booth complete with sliding door and tin walls; some stained glass at the front; and a singular design scheme that could only be called a cross between wine cellar and ship’s hold.

A series of faux-stone arches border the room. Just below the ceiling at regular intervals are small carved characters—like the figureheads that used to adorn the front of old sailing vessels—of drunken men hugging mugs and casks. Most remarkable is the huge colored frieze behind the bar of an 18th-century gentleman of sorts, in pantaloons and stockings, sitting in his cellar enjoying a flagon of liquor and a long pipe. What it all means, who can tell. Nobody gave it a glance besides me.
—Robert Simonson
· Previous Installments of A Beer At [~E~]