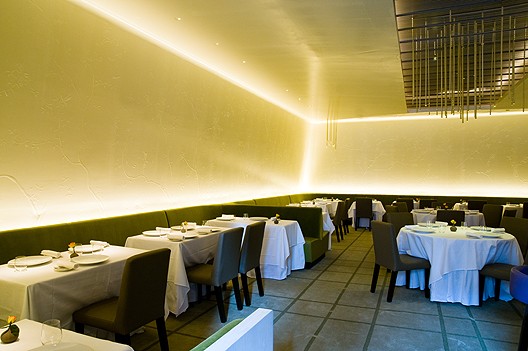 Corton: Corton with posse of only slightly hungover best new chefs (namely Animal guys and Linton Hopkins). Killer tasting menu. Highlights: lamb loin with an espelette pepper-bone marrow crust (bone marrow so smart cuz it adds nice fattiness) and, on the side, lamb neck with morels, pistachios and ramps cooked in a very awesome fata paper papillote (fata paper is clear and shaped into a ball and they cut it open at the table, very cool). BNC and Corton chef Paul Liebrandt dutifully says hello to the very famous super model at table 26. — Kate Krader

Baoguette: After reading so much love for the Baoguette on 26th and Lex I'm glad Bamn! mercifully ended its existence on St. Mark's and 2nd to yield its space to the Bao. As good bahn mi should be, the ones ordered here today were cheap ($5), huge, filled with meats and pickled vegetables, and ready in under 10 min. Definitely on par with neighborhood competitor, Nicky's. NB: Michael "Bao" Huynh was in the house to make sure all went smoothly.— Kludt

Anthos: Had a birthday splurge lunch today at Anthos. I had tried their lamb burger at the Bon Appetit Pop up supper club thing, and was pretty excited to have the real thing cooked fresh in the real kitchen. Started with the "Anthos tartare" which came served on top of this delicious persimmon sauce, and was amazing. The burger, which tastes more like the best kofta kebab you've ever had, was as good as I remembered, and should be considered up there with the best in the city (burger purists be damned!) Dessert was a chocolate cake served with kalamata olive ice cream that I would not describe as subtle. Best part... it completely worked. (I shit you not.) Psilakis is the man!— Zach Brooks

Rose Water: Last weekend, I took Brooklyn Restaurant Week for a spin. Destination: Rose Water. It was an unseasonably warm Saturday night, but miraculously the host managed to squeeze us into an already packed house with a minimal wait. The place has got a crunchy college vibe that made me a bit nostalgic. The attitude is distinctly non-Manhattan. Servers are educated but indie (our waitress, if I recall correctly, had a shaved tattooed head), and the kitchen's got a sustainable ethos, but in a Utopian, "this is how it should be" kind of way. The restaurant week selections—an incredible value at 3 courses for $23—included the first three dishes from the appetizer, entrée and dessert sections of the menu. (How refreshing to have options from the regular bill of fare, not some poor man's version of it.) I went with a satiny cream of celery root soup with brioche croutons, a moist roasted chicken with fingerling potatoes and cippoline onions, and a sick warm chocolate-mint cake (not molten!) with a hulking scoop of pistachio ice cream. The food kicked ass—wholesome yet just decadent enough, generously portioned and prepared with integrity. I won't wait until restaurant week to go back.— Gabriella Gershenson

Caracas, Brooklyn: After checking in on the dining rooms at newcomer Rye (soft open) and Vutera (recently revamped) and deeming them too much of a commitment for what I was looking for, I enjoyed a quick meal at Caracas. Huge signs warn diners upon entry that the restaurant has revoked its BYOB policy, an occurrence that's taking place across the nabe. Their reina pepiada arepa, though pricier and smaller than those found in Venezuela, was cheap, filling, and delicious. They also have a great brunch.— Kludt