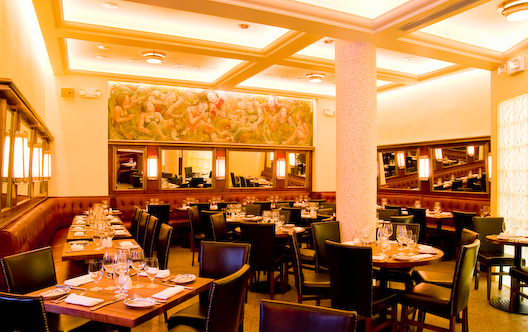 The Monkey Bar: Revealed by the Monkey Bar's own Jeff Klein, on the night of his dismantling at the hands of Steve Cuozzo (a dismantling, one might note, that Mr. Klein took both seriously and in stride): the crucial menu item is the chili. To repeat: the crucial menu item is the chili. Our table had it as an appetizer, which almost constituted a misplay, insofar as we couldn't stop eating it, and it threatened the consumption of main courses. Anyway, order it. That's all.—LS

Commerce: Ended up at Commerce while wandering around the West Village starving one Wednesday night. After hearing mixed to poor feedback on the place, I wasn't expecting much, but it was actually really solid. The house was packed, contributing to the unbearable noise levels, but we had a great lightly dressed salad, perfectly cooked steak, and a delicious chicken paillard. Glad I got to give them a chance.—Kludt

Benoit: It's been a little while since Pierre Schaedelin took over the kitchen at Benoit. The first time I ate there around the time it opened, the food was perfectly agreeable—I remember best the bouncy profiteroles filled with plenty of chantilly. But back then, the buzz of the new was still present at this very traditional francophone spot. This time, I went during the early bird hour (6ish) on a week night. For lack of a better word, the vibe was somewhat geriatric (not that I expect much different from the former LCB). But the food was really quite good. Solid garlicky escargots, a fresh and flakey pastry-wrapped salmon entrée, a very generous sardine tartine heaped with grilled fillets for a mere $12. For this part of town, it's a desirable pre-Radio City option, though I wish, for its sake, the restaurant was a little less frumpy (how much nicer would that dining room be if the wood paneling was rich and dark, instead of a chintzy-looking blond?)—Gabriella Gershenson

Il Passatore: I never much liked this place back when it opened a year and a half ago, but a revisit shows a great deal of improvement. I defy you all to find a place serving better and cheaper homemade pasta in such a lovely outdoor setting. Our glasses were dirty but a huge carafe of house wine for $23 made up for it.—Kludt

La Superior: Controversy engulfs tiny, kitschy La Superior: Is the menu authentically Mexican (or even LA-style Mex)? Can the staff really be as rude as people say? And are the dishes truly delicious? Yes, yes, and sorta. At dinnertime, you'll likely be greeted by the man-with-a-giant-beard. He is indeed brusque, but means well. Servers do sit down next to you when taking orders. Luckily, they can answer questions—an inevitability since this joint hawks unusual fare. The torta ahogada, for example, billed as a "Guadalajara classic of classics...the first in New York," is like a French Dip sandwich prepared Mexican-style: pork and beans on sourdough bread and smothered in a mild tomato sauce. Big portion for $7.50, but it needs more seasoning. Overall, dishes are hit and miss: The fresh guac and chips (cheap at $5) has a terrific creamy texture and lime-forward flavor. And the shrimp taco with chipotle sauce is fiery bliss. The gorditas ("Mexico City's street food favorite") and queso fundido (with mushrooms or chorizo), however, sound better than they taste and can be bland. The liquor license is a work in progress, but Mexican sodas, like tamarind Jarrito, complement the food well. There’s no dessert, but you won't have room anyway.—James Oliver Curry

El Almacen: Get ready: when this sweet little Argentinian place gets its liquor license, it's going to become just as overrun as nearby spots Motorino and La Superior. Unlike its predecessors, El Almacen didn't have enough time to lock in the regulars before the SLA forced them to halt their BYOB policy, but the people will catch on.— Kludt