After breaking the news this morning that one of Astor Place's two Starbucks locations—the "cute one with the garden" fronting Third Avenue, on the eastern edge of the square—was set to close tomorrow, we decided a location this iconic deserved a proper sendoff. And so, thanks to the emails, comments, tweets, and Facebook postings of Eater readers and friends, here we go.

Pierre Calzadilla, Trulia: "This was probably my favorite 'bucks in all of NYC: addicts, models, students and professionals great people watching venue."

Mark Lamster, author and baseball blogger: "It wasn't always a Starbucks! Architects Smith-Miller+Hawkinson get credit for the design of the original Pasqua coffee at the same location."

Business Wire, July 3, 1997: "Pasqua Coffee will be opening a new store in the East Village's Cooper Union July 11. The new Cafe, at 3rd Avenue and East 8th Street, is located just 1-1/2 blocks from the biggest Starbucks in the country, located at Astor Place and East 8th Street."

Peter Engel, recruiter: "They should never have forced out the Astor Riviera Cafe. Great place!"

Alec Appelbaum, architecture critic: "The concrete ramp and the little nook of tables behind the bathroom made it less like a typical plop-in Starbucks and more like a little medieval city. Also, bathroom access away from the counter, in and out with no hassle."

canyouwink, Gawker commenter: "Bring back the Astor Riviera diner! I pulled a couple all-nighters there, waiting out the first MetroNorth back Connecticut in the morning."

BitterGreen, Gawker commenter: "That Starbucks on the corner of 3rd and St. Marks was formerly a Timothy's (or perhaps New World Coffee)... it was definitely some other chain that Starbucks crushed beneath its heel. And before it was Timothy's.... it wasn't anything other than the place where the 'Sign The Petition' lady would stand and scream in my face every night when I walked past her." 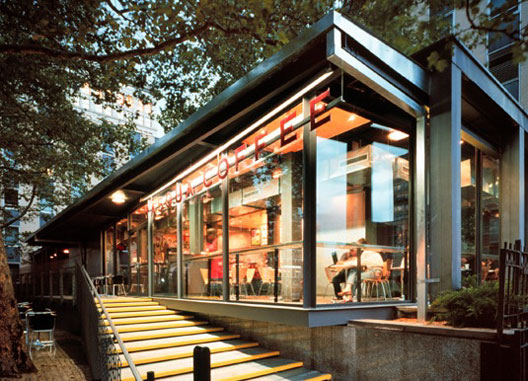 [The original Pasqua Coffee, circa 1998]

New York Times, August 29, 1999: "Carly Girard, who had been going to Pasqua for two years, agreed with Mr. Alardo. 'They're totally monopolizing the city,' she asserted, saying she refused on principle to enter Starbucks. A Starbucks spokeswoman, Cheri Libby, said another Starbucks would meet customer demand and added: 'Even if they're close to each other, they could be completely different communities.'"

Sneakeater, Eater commenter: "I once had a girl call me from there to break up with me, ages ago."

@joshuadavid1: "2005: Met a man named Noah for a class, Learn The Game. He explained to me on a Starbucks napkin how to score with insecure women."

Mary, journalist: "Two winters ago or so on a Sunday afternoon, I was sipping a hot chocolate at this Starbucks and slogging through some undergrad reading at a table near a window. To my left: a man and a woman sitting across from each other talking. A heart-shaped box of chocolates, perhaps purchased at the K-Mart nearby, rested on the table between them. Both of them were pasty-skinned, pudgy and looked like they were in their mid 30s. The woman had an endearing amount of blue eyeshadow on. The man's hair was heavy with gel and parted carefully to the left. After 5 minutes of "Where are you from?" and "What do you do?" conversation, it became clear that they were meeting for the first time. "It's so nice to meet you," she said. "Finally." "Yeah, you too," he said, looking down at his lap, fidgeting "You're a lot cuter than your avatar." RIP."

Jessica Coen, managing editor,nymag.com: "This is weird, BUT: one of my favorite summer mornings with an old boyfriend was when we both walked to work together, parting ways at astor place, after we'd gone to that Starbucks. It felt so normal and sunny and suburban."

@kath: "I love that its back courtyard holds one of the original Penn Station eagles relocated after demolition, watching over latte-drinkers. Here's an image of the eagle."

Friend of a Friend, Gawker commenter: "This is a personal tragedy for me. I met my husband at Starbucks. Not at the same Starbucks but we saw each other at different Starbucks across the street from each other."

Leslie from Washington Heights, once-a-month customer, 1:30pm today: "I was surprised at first because you always see Starbucks going up. You never see them coming down."

Hamilton Nolan, Gawker: "We knew SBUX was having trouble, but this—this is the end of the world as we know it. If you lived in New York during the NEW GILDED AGE of the mid-to-late 00's, you'll always remember those two Starbucks, a mere block away from each other, standing astride the East Village like living 'Fuck You''s to anyone nostalgic for the heroin and Bob Dylan and Basquiat and all that other romantic shit. Starbucks, baby. Suck my latte. Now there's only one Astor Place location left, dangling all alone, like Lance Armstrong's last testicle."

Alyssa from Woodside, once-every-other-week customer, 1:30pm today: "It bums me out that they're closing this one and that that one because I like this one better. I like the outdoor space and it's easier to move around in."

Jeremiah Moss, blogger, VanishingNY: "There was a time you could stand on the corner of St. Marks and 3rd and look west upon a trio of Starbucks: 1 to your right, a big 1 dead ahead, and #3 in the Barnes & Noble. Now there will be one. This is a dream come true."

@editorialiste: "The company finally gave in to the Lewis Black 'Two Starbucks' joke."

Curbed commenter: "That location never made any sense. I emailed their 'location tip' email and told them to put one in the bottom of the Soho Court building (Houston/Elizabeth). The mgmt co. just gutted 3 groundfloor units and put in plate glass and retail doors, and has OC. It would be perfect. There are eight 12 floor apt buidlings within 1 block, including the 3 Avalons.... There are zero morning coffee options; Except a new Think coffee that just opened on Bowery and is packed 100%. I got a cutesy response from some intern. Thats when you know Starbucks demographic software that puts there stores in right turns is officially kaput." 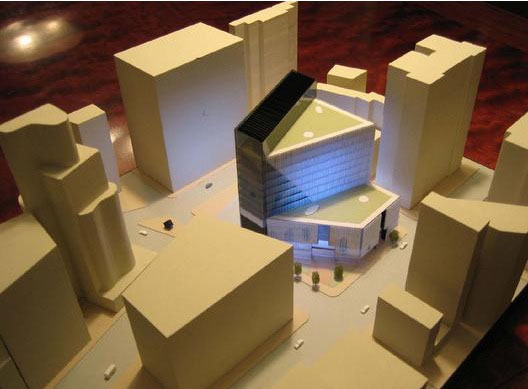 Curbed commenter: "It's shocking that the community has not realized that this building is going down. Unlike past efforts to save smaller buildings, the Cooper Building is actually a substantial, visual landmark in the East Village. It's massive, well designed and interesting. The triangular block thing they want to build should go to midtown where it will be in context with the surrounding architecture. Are there any groups who are petitioning landmarking or otherwise? Did the community boards have a say in this?"

@brianvan: "What drink do I pour out for my dead homie on this occasion? Venti soy latte half-caf?"

Starbucks Barrista, asked about the closing sign on the front door, 1:30pm today: "Um, I can't talk about that."