Eater Inside: The Clerkenwell

Share All sharing options for: Eater Inside: The Clerkenwell

Lower East Side: Officially opening tomorrow in the former Summers/aKa Cafe space at 49 Clinton St., we welcome The Clerkenwell, a self described traditional gastropub with about 40 seats. Modeled after London's first gastropub (founded in '91 fyi), The Clerkenwell will serve traditional, heavy British fare like Toad in a Hole, beef pies, fish 'n' chips, and breaded English goats cheese alongside beers like Boddingtons, Guiness, and Bass (with some more imports on the way). For brunch expect bubble and squeak, eggs and soldiers, and bloody marys and oysters.

Appetizers range from $6-8 while entrees hover around the $13 mark. A rep at the restaurant explains, "Since we're on the Lower East Side, we want to stay in a nice price bracket. And the menu is a little bit heavy right now, but give it three or four weeks until the sun comes out and we'll do some nice light salads." After 11 on the weekends, they'll serve a late night menu of sliders, mini pies, and other riffs on the main menu. See a tipster shot of the brunch menu ahead. 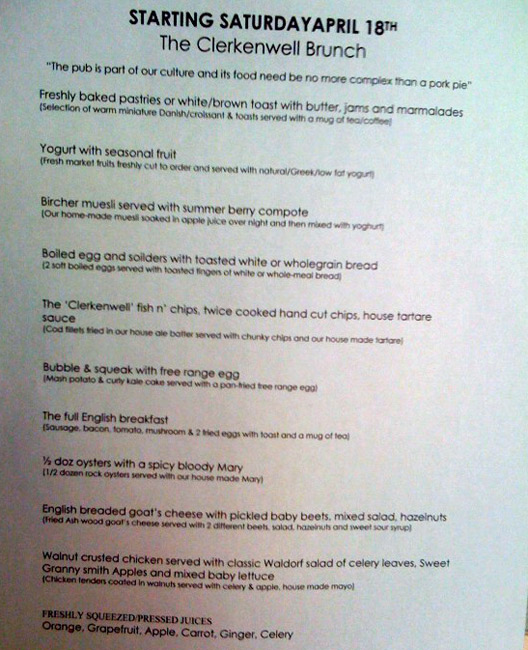