And now, a brief round up of the last couple of weeks in small time shutters. Know of another? Send it over. 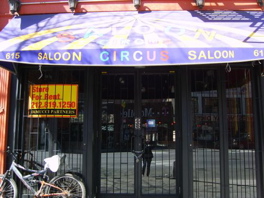 1) Midtown: NY Barfly reveals that not even dive bars are safe in this economy with the news that Midtown-West's Circus has closed: "On a recent tipsy stroll, we noticed that the gates were closed and a for rent sign was posted. Looks like the recession’s claimed another victim, though this one was pretty easy to see coming." [NY Barfly]

2) West Village: Grub Street reports that another West Village drinking spot, El Ray del Sol, bites the dust: "It won’t be reopening this season, as a sign on the façade and a disconnected phone number attest. We’re anxious to see who takes over the space and how they’ll make use of the picnic tables." [Grub Street]

3) East Village: Time Out NY brings word that East Village tea shop Sympathy for the Kettle is closing up shop in favor of internet sales instead: "According to the owners, a future New York City location is in the works, so stay tuned." [Time Out New York]

6) Columbia Waterfront District: And in the world of temporary shutters, Bronstoner reports that Korhogo 126 has been closed by the Health Dept. This comes after it was seized last June. [Brownstoner] UPDATE: From the tipline: "Actually, the DoH yellow sticker has now been covered with a handwritten note with a message along the lines of 'Korhogo is now closed. Thanks for your patronage,' suggesting they don't plan to reopen."
— Bailly Roesch
[photo credit]