Who Goes There? Francisco’s Centro Vasco

Share All sharing options for: Who Goes There? Francisco’s Centro Vasco 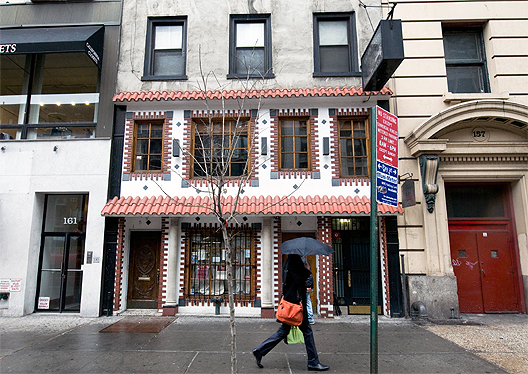 [Krieger, 3/19/09]
Chelsea: With good reason is there a neon lobster hanging outside Francisco’s Centro Vasco, the old-school Spanish restaurant that has stood for 30 years, inscrutable and incongruous, on a bustling expanse of central Chelsea. When you sit down, before you’re even handed a menu, the waiter places a hand-lettered index card on your table, indicating the size and cost of the lobsters available that night. Everything from 1 Â½ pounds ($20) to 14 pound whoppers ($225).

Very easily half the tables on a recent, busy weekday night ordered the butter-bathed red crustaceans, which flew out of the kitchen at an alarming rate. (There must be multiple caldrons of boiling water in the basement.) One can feel like a second-class citizen ordering something else from the menu. “Is the fact that no one’s ordering the Paella a signal that it’s not very good?” asked a woman.

The huge amounts of cash being laid down for high-end seafood has given Francisco’s a somewhat grand sense of itself. A short velvet cordon, controlled by a very proud, small and bald maitre’d, separates the bar from the dining room. He will lift it for you after you state your intentions. This formality is kind of funny, since Francisco’s may be the only restaurant left in Manhattan to hand out plastic lobster bibs (the waiters tie these around the diners necks with gracious ceremony) and to employ a guitar player, who strolls around the rather aesthetically chaotic dining room—fake marble, fake timber, fake brick, a large mural of some Spanish port, and lobster claws hanging from the stucco ceiling.

So, who goes here? People celebrating birthdays, that’s who. Within one half hour, the guitarist sang “Feliz cumpleaños” at three different tables. It was comic, but no one blinked. I was told that birthdays are commemorated with lobster tail and sangria every night at Francisco’s. No wonder they need a musician on the payroll. Beyond that, the crowd was one of the most pluralistic I’ve ever seen in any New York restaurant. There were tables of Asian-Americans, African-Americans, Jewish couples, Hispanic parties, Spaniards and one gathering of Wall Street young bucks. It was a melting pot. All were chowing down of mountains of seafood with the gaiety of invitees at a particularly jovial wedding reception.

My waiter said the place gets locals and “people from Long Island.” He could not explain why a place on 23rd Street was a magnet for folks in Nassau County. But then, it was hard to learn anything, for the staff is almost exclusively Spanish-speaking. So I turned to my neighbor, who had been to the restaurant many times, to get an opinion on Francisco’s bread and butter. “The lobster?” she said. “It’s OK. I like the king crab.”
—Brooks of Sheffield
· Previous Installments of Who Goes There [~E~]