One Year In: South Gate

Share All sharing options for: One Year In: South Gate 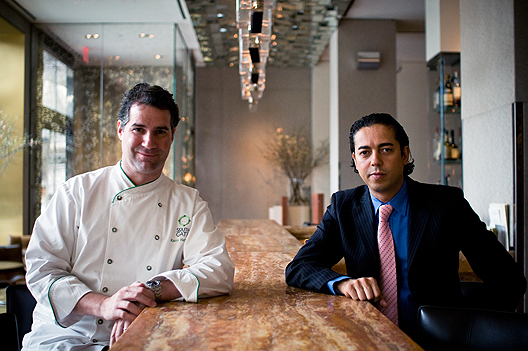 Central Park: South Gate, the grand Central Park South restaurant that opened in the Essex House last year—the first restaurant to open in the building since the retreat of Ducasse—didn't have the easiest time of it. The critics were not incredibly friendly, the space seemed way too swanky for the times, and many didn't think it would survive this economic shitshow. But chef Kerry Heffernan and General Manager Hicham Enhaili tell us they're doing just fine—better than ever, in fact. Let's see how they've weathered the year:

Were you apprehensive opening this big of a space in the Essex House, the first restaurant since Alain Ducasse closed his? Kerry Heffernan: Well, I think it’s very different. I didn’t think that much about Ducasse because it was such a different environment, such a different focus. I just thought about what a great location, what great physical space. This is a view of Central Park. Very few restaurants in this neighborhood have a view like this...it’s really become a place that’s been embraced by Central Park South locals.

Do tourists come in too? KH:We sure do, we sure have some tourists, as well as international clientele and hotel guests.

I think as time goes on and you see a more challenging environment for restaurants, a few less restaurants opening up, people are going to start focusing on what they might have not been able to pay attention to because there was so much going on. There are so many openings and so many restaurants, something’s on top of your radar, and life goes on, you don’t get a chance to check it out. And suddenly you're like, oh I never made it there, I should try it. I think we’re becoming that place.

So you think even more people are coming now than a year ago? Restaurant week was a great way for us to make a lot of new friends and introduce people that hadn’t had a chance to experience it. We are holding very steady, if not increasing business. It’s a tough time for everyone and who knows, a year from now or when the real impact of this ugly economic situation hits to even a greater degree, perhaps things will be different.

What changes have you noticed? KH: People who would normally buy first growths are buying second growth Bordeaux’s, but maybe they’re buying two bottles. Our clients who are coming in are maybe being a little less ostentatious, but they’re still dining, they’re still going out, they’re still enjoying themselves. If you look at the whole package and what you might pay at comparable restaurants I believe South Gate to be valuable.

But your price point is still a little high. Won't people be turned off now that their budgets are a little tighter? KH: I think that the people who have spent this will always spend this. I think there are some people for whom it's not within their means, and nothing is going to change now to bring them there, except Restaurant Week.

Are you going to extend your specials at all? KH: We’re extending restaurant week lunch and Sunday evenings until March 20th. The menu is created in a way where you could still get an entrée way under $30. We also have the tavern—its what we call that sort of row of tables in the front—and then we have the bar.

That's a separate menu than in the dining room? KH: And the bar is a quite different animal. It’s a place where people come, say around 5, 5:30...by 7:30 the dining room picks up its own energy and becomes its own driver of the climate here and then say 10:30, 11 as the dining room dies down, the bar picks back up.

Has the set-up of this space evolved at all over the last year? Hicham Enhaili: We are adding more seating into the Tavern. We need more seats. The Tavern has become such a huge success. Any other tweaks, other than adding seating in there? Where do you see this place next year? HE: We are extending more into downtown more and also other hotels with the concierge outreach program that we do. We approach different concierges from different hotels and bring updated menus and invite them for dinner to have the experience of South Gate.

But we are extending our bar area a little bit more, with music and having more of a scene at night between 11:30 to 1, that’s something we’re working on as well. But our clientele base, we are having more fashion people and business, come experience South Gate and international too, Latin America, Brazil, Europe.

If you knew this financial crisis was going to happen, would you open the same kind of restaurant again? Or would you think, maybe we’ll do a burger place here? KH: Yes, we might have created something that had a bit more casual focus but in the end people have proven that they want to come here for this experience so who am I to tell them?

And if you were to give advice to other owners of upscale fine dining restaurants, how to survive this recession, what would you say? KH: Oh boy that’s a loaded question. I don’t pretend to know anything more than they do honestly...There’s nothing complicated about it in that you just have to make sure that everyone comes in thinking that they have—this is what Danny [Meyer] says—golden handcuffs. You leave them no choice but to come back to you. Obviously everyone is doing an awful lot more than they used to. This was something that Danny had said, that you're never done enticing guests and making the most of every experience they have. You never take them for granted. And I think unfortunately, when you back up a couple of years, without naming any particular restaurant or kind of restaurant, I think that business was good enough, the demand was so great, that maybe you didn’t have to work so hard.

It's true. There are a lot of shutters that are heart breaking, but some of the restaurants just weren't getting the job done. KH: Yeah, I mean there’s a, I hate to use the word Darwinian aspect to this, as you said there are many cases that are like the humpback whale that’s caught in the lobster trap and it’s just in the wrong place at the wrong time.

Anything else you're working on for the next year? KH: We’re very involved in the local charities...Its hard for everyone to continue to remain focused on charity right now, but that’s something else that Danny taught us, now is the time that you have to double-down on your outreach to charity because this is when those funds are evaporating and people need it the most.
· Previous Installments of One Year In [~E~]