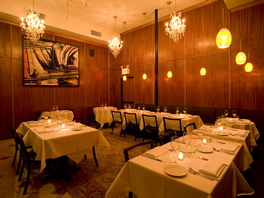 It was back to business as usual at Community Board 2 last night. After six long hours, some survivors emerged:

1.) 10 Downing appeared to request an upgrade to their beer and wine license. Members of the community, however, had a number of concerns, including that the restaurant may be within 200 feet of 2 schools. The committee debated whether or not to strap on some stipulations to their resolution, but the motion failed in a close 4 to 3 vote. Though they denied 10 Downing, they suggested that they come back after a few more months of operation.

2.) HooMoos on Kenmare St. kicked off the string of rowdy presentations. The Kosher restaurant sought a full liquor license to remain "competitive" in their area. They are currently closed for renovations, and hope to reopen with the full liquor license. After listing their hours of operation, one board member asked, "So you're Kosher, but you're not Sabbath observers?" An equal number of supporters and opponents showed up to the meeting, but the committee ended up flat-out denying the applicant.

3.) The drama on Kenmare St. continued with the Village Tart, who previously sought a full liquor license but for now are settling with a beer and wine license. Their original concept was to include liquor-infused yogurts on the menu. The owners claimed to be opening in 5 weeks regardless of whether or not they had a license, but some members of the community mentioned that the last time they appeared, they said they would open in 4 weeks. The meeting got personal when some members of the community called out Lesly Bernard's past involvement with nightclubs, citing and quoting from this BlackBook magazine interview.

The committee was torn, as one member suggested it was probably the best application for this space, but if they approved it, the community would go postal. They ended up flat-out denying them, on the basis of huge community opposition and the fact that no license previously existed in the space. They suggested coming back after 1 year of operation if they still wanted a license.

4.) The owners of V Bar are still looking to open an "old school Italian restaurant" on the Bowery, despite being denied by the committee at a previous Bowery location several months ago. They looked at a space on Greenwich Ave. and were approved, but the owners are "in love with the Bowery," so they came back to face the committee again.

When talking about the location, which is between Great Jones and Bleecker, owner Enrico said, "It's a bit shady, if you ask me," and suggested that a restaurant would make the block safer. One CB member took offense to the comment, and several members of the community scoffed at his statement. The applicants, having not changed their concept or hours from their original application, were denied again in a close 4 to 3 vote.

5) Noble Food & Wine on Spring St. presented for a renewal of their license, which is a rare occurrence. Applicants for renewal only appear before the committee if there have been a significant number of complaints. he reps said, "These noise complaints are news to us," and also admitted to being open past their 12 a.m. close time until their last patrons are done. They are currently closed, but have allowed Lovely Day to use their kitchen for light delivery service. When they reopen, they will have James Kent, formerly of Tabla and 11 Madison, as their head chef. Though there was plenty of opposition to the applicant, the committee voted to write a "strong deny unless" resolution, meaning that all the stipulations they agreed to in the meeting must be in order before the committee would approve them.

6) There was one noteworthy approval: the operators of the Jane St. Hotel were approved for their hotel restaurant.

7) Cinema Nolita was a no-show yet again, and so were denied.
—Noah Adler
Noble Food & Wine in happier days [Kalina]