To get everyone appropriately pumped for next week's South Beach Wine and Food Fest we've been interviewing the top contenders for the Burger Bash. One time champion Randy Garutti, burger master at Shake Shack is cagey on the details, but here's the lowdown on his strategy 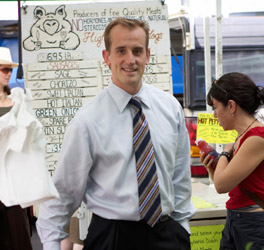 We've heard some rumblings that you're switching things up this year. We are going to do something a little bit different. I don't think I'm ready to announce it yet. I don't want to make a big deal out of it.

You're feeling the pressure since you've lost the last two times? It's not even that as much as there's a new contest that we can't even win, because to win it we would have to use the sponsors' beef. So we can't win the judges award. We're not going to take the free meat. We use La Frieda like we always do

It is too bad though that you can't get love from the judges. It's a little strange that only half the group is eligible for the judges award. But that's fine. This is our fourth time. I think we're the only people there for the fourth time and we just want to go down and have some fun. For us it's an opportunity for our younger guys to see Miami, see the events.

Who has the burger to beat this year? I said the same thing last year when you asked me. We're not really in it to win it. We're the veterans, and we do hope we win. But we want to have fun.
· All Previous Burger Bash Coverage [~E~}