The Shutter: Via Oreto, One Ten Bar & Grill, Yorganic, and Vin Rouge

Share All sharing options for: The Shutter: Via Oreto, One Ten Bar & Grill, Yorganic, and Vin Rouge

We're happy to report that for the first time since the New Year, we have less than half a dozen shutters in one week. Sadly, four spots have still served their last. If you know of more, let us know. 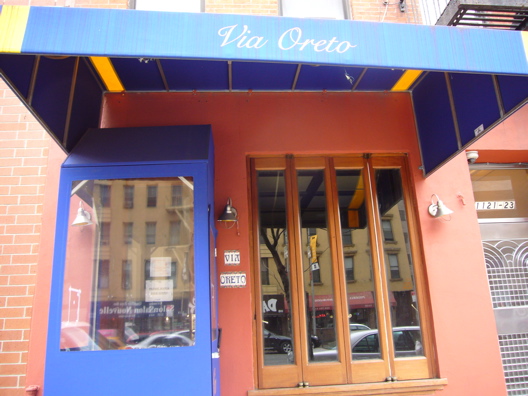 Upper East Side: A tipster reports on the shutter of Upper East Sider Via Oreto: "First it downsized to its original small space, then, a few weeks ago, seems to have gone dark completely. Some legal notice on the door, but always too dark to read when I wander by. Telephone recording says 'The number you have reached has been temporarily disconnected.' Another one bites the recession dust..." [ShutterWire]

FiDi: EV Grieve reports that One Ten Bar & Grill at 110 John Street has closed: "...their signage is gone from out front...but their flag still flies." [EV Grieve]

Midtown: Midtown reports on a a fro-yo shutter and wonders if it's the first of many: "Who knows how long ago this happened but I noticed today that Yorganic, the Froyo place in the Crystal Pavillion Food Court on 3rd Ave. btw. 49+50th, has closed. A combination of weather, the economy, and oversaturated market place could spell trouble for a lot of the Pinkberry knockoffs..." [ML]

Greenwood Heights: Some shutter news from the last week that we were tardy in catching: "Less than two years after it opened at 629 Fifth Avenue in Greenwood Heights, much-loved ("a reason to love gentrification," one Yelper said) wine bar Vin Rouge closed its doors this weekend. According to a post on Brooklynian, the shuttering has something to do with a rent dispute as well as the declining economy..." [Brownstoner]