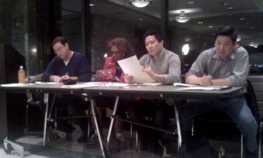 If Community Board meetings are any indication of where the restaurant scene is heading, the next few months are going to be a tough ride. CB 2's SLA Licensing Committee meeting, usually a four hour affair, lasted a brief hour and a half last night, thanks to a frightening absence of a number of applicants. Luckily, Gabe Stulman came by to save the day:

1) Gabriel Stulman of Little Owl and Market Table fame (see more here) is looking to open an eatery at 170 Waverly Place, a former home of Les Deux Gamins. He presented his concept as a more casual atmosphere and with a lower price point than his previous establishments. He also specifically wants to open a place that will be open from breakfast until late, so that "people who work late can get something to eat that's not pizza." The entire space will seat 30, with 12 at a bar that opens to the kitchen. His attorney told the committee that they had been working together for 14 months and this was the third location they were eying. At one point, a landlord sold the building out from under them while they were going through another CB process. Seven people spoke in support and submitted rave reviews to the committee. He was approved unanimously.

We caught up with Stulman, who told us he's not set on a menu yet for this "American brasserie," his first solo venture, but he's thinking French with touches of American cuisine.

2) 49 Bond St. faced the most opposition of the night. They had met with neighbors under the supervision of CB 2 member Zella Jones in December and were returning to pursue a beer and wine license instead of a full liquor license. The new proposal included a ping pong table in the basement, which prompted questions like, "Will there be beer pong?" The ap, however, was doomed from the start, as that block of Bond St has an "oversaturation" of food establishments whose venting issues are a problem for neighbors. Due to the density and the fact that they sought a first-time liquor license for that location, they were denied.

3) Trattoria Lucca returned with a seating plan of 240 indoor seats and 54 outdoor seats, at which the committee balked. The committee resolved to "deny unless" they agreed to forgo the outdoor garden until they had secured support from their neighbors. Since they agreed, it looks like a green light. They may pursue an alteration to their license to include the outdoor area in the future.

4) Havana Restaurant at 94 Christopher St, a proposal for a traditional Cuban restaurant, won a unanimous approval

5) Cinema Nolita at 178 Mulberry, Felipe Avalos at 170 Elizabeth, and Mondrian Soho were all laid over. Francois Cafe at 35 Grand was laid over due to an incomplete application.

6) Finally, the no-shows: The "disco" on 8th Ave, and Sark Holdings at 230 W 4th were withdrawn. New Tu Do at 102 Bowery, 120 Christopher, 250 Howard, Tropical at 128 Elizabeth were nowhere to be found. "Sam Talbott" was a no-show for the third time (perhaps because the chef Sam Talbot already has a gig). All were denied, and Talbott's app has been removed from the agenda indefinitely.
— Noah Adler
· All Community Board Coverage [~E~]