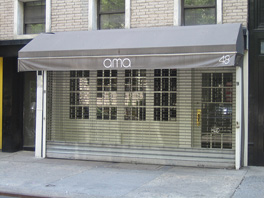 Yesterday evening Community Board 2 convened in the cafeteria of St. Vincent's Hospital to mete out the fates of restaurants, gastronomic business hotel hybrids, and other establishments seeking liquor licenses. As usual, some left unscathed, while others were sent back to the drawing board:

1) Donatella Arpaia will remain a principal in the project that soon to occupy the former Ama space on 48 MacDougal St. A Centovini alum and member of the American Sommelier Association was in to present for the proposed restaurant, which will have more of a French bent than its predecessor.

2) Back in October, it was reported that celeb chef Aaron Sanchez was working with Dario Wolos Cantu, the owner and operator of the successful Playa Del Carmen taco truck Señor Tacombi. Cantu appeared at last night’s meeting to reveal that he and Sanchez are applying for a beer and wine license for a forthcoming full-service restaurant at 267 Elizabeth St.

Born in New York to a French father and Mexican mother, Cantu explained to the board that opening up a place like this has been a lifelong dream; the very plan he’s adapted for the venture won him best business plan of the year when he was a student at Cornell. He hopes to “bring the Mexican street experience” to the 2,100 square foot space. Save for one board member citing obvious Bowery concerns, most of the committee members were supportive of the proposal. However, it remained unclear at the end of the meeting if the motion would pass. Cantu told Eater that he is flexible and “not married to the space.”

3) The board suggested a likely denial for the alteration application for the former FR.OG space at 71 Spring St. Though the board was receptive to the applicant’s proposal for a new, non-nightclub Greek restaurant, they couldn’t overlook the fact that the operative responsible for most of the past shenanigans at FR.OG remains a principal on the liquor license. Not to the mention the applicant stuck to his proposal for an extension of the FR.OG operating hours.

4) After having been forced to layover their application last month, the team from Sbafo returned to apply for a full license for their proposed Neapolitan pizza restaurant on 581 Hudson St. The principal was actually in attendance, and he agreed to all board stips: closing French doors by 9 PM, doing community outreach before the full board meeting comes around, submitting a proper diagram of the seating arrangement by the end of the week, selling no pizza by the slice, and of course, trimming down hours. Curiously, this time around there was a lot less talk about the team’s penchant for mixology.