Share All sharing options for: Friends and Experts Make Headline Predictions for 2010

To close and celebrate 2009, we asked a collection of friends, industry types, bloggers, and readers to weigh-in on top newcomers, standbys, neighborhoods, and meals of the year; plus their biggest dining surprises of 09, breakups, and 2009 in one word. On we go to Headlines for 2010. 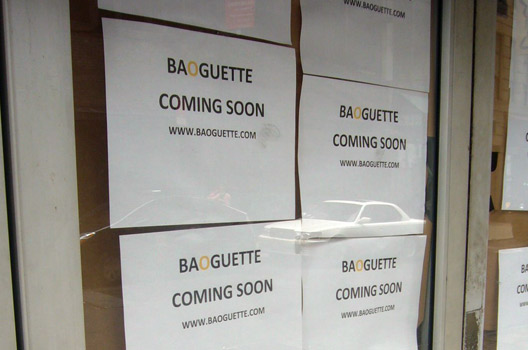 A Baoguette is always coming soon [via EVG]
Q: Headline Predictions for 2010.

Ryan Patrick Sutton, restaurant critic Bloomberg: Casual walk-in restaurants create demand and manage their own food inventories more efficiently by requiring reservations specifically for popular items (i.e. Momofuku Fried chicken), much to the chagrin of diners who thought you only needed to battle the phone lines at French Laundry; Thomas Keller realizes he needs to give New York the Balthazar-sized Bouchon it deserves so we don't have to spend two hours waiting for a Balthazar brunch table.

Kate Krader, restaurant editor Food & Wine: VEGETABLES. And maybe maybe more healthy dishes. Chefs, like Mario, are making meat the side dish for health and environmental reasons (his Otto cookbook coming out in April 2010 is all about that). Even the chefs at Animal in LA - Animal! - say they're getting sick of all the pork belly in their staff meals and going towards more fish and vegetable dishes. David Chang has talked vegetables since before last year. Also, more southern (at an upcoming place there's word of barbecue spaghetti!!). And more regional American, yippee. And I think/hope there's a new tier being established above the comfort food mob. Eleven Madison's 4th star was so huge - also Marea's success - I hope that things like Fabio at the Four Seasons and Jonathan Benno at Lincoln Center means food that's nicely ambitious, and of course delicious, in a not-too-refined setting.

Danyelle Freeman, Restaurant Girl: South East Asian food is going to get even more popular this year. Fish sauce and chili paste are about to become common condiments. I'm most excited about Peruvian dishes and ingredients -- like corn and peppers. It might be wishful thinking, but I think New York is finally going to get some standout Mexican joints with cactus dishes, regional moles, and tamales.

Merri Lee Kinglsy, publisher of Saveur: All about the real deal?Authenticity and heritage is hip.

Aaron Ginsberg, Always Eating: Del Posto nabs 4-stars from the Times; Spending on the rise, but it's the rustic, simple cooking that diner's crave; Ethnic eats such as Korean and Peruvian become more mainstream; Michael (Bao) Huynh, is he spreading himself too thin?; More and more restaurants forced to utilize social media to keep up with the rest of the industry; Shake Shack continues world domination!

Solish: Bao chain is really just a ponzi scheme; Bottle service back with a vengeance; Todd English and Gordon Ramsay tram up to open the Comeback Inn; The Beatrice returns!

Kludt: Momofuku Makes the Long Awaited Move to LA; In & Out, Threatened by Shake Shack's National Expansion, Finally Hits NYC; Michael Bao Beats English, Chodorow, and Batali to the Punch, Opens a Food Court of his own.

Have a prescient or witty headline? Throw it in the comments.