Share All sharing options for: Experts Choose the Best Dining Neighborhood of 2009

As is the tradition at Eater, our closeout of the year is a survey of friends, industry types, bloggers, and readers. This year, we asked the group eight questions, from Meal of the Year to Top Standbys. Top Newcomers, Top Standbys, Biggest Dining Surprises, and 2009 in One Word dropped earlier, and all will be answered by the time we turn off the lights on Thursday. On we go, in no particular order; all responses cut, pasted and unedited. 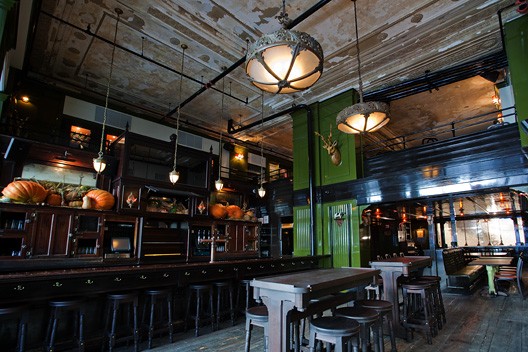 Steve Cuozzo, the Post: Midtown, of course. How could it not be, with Le Bernardin, DB Bistro Moderne, Milos, San Pietro, Wu Liang Ye, Sushi Yasuda, Shun Lee Palace, Alto, Aquavit, Hatsuhana, Pampano, Adour, BLT Steak, La Grenouille, Oceana, Anthos, Il Gattopardo and The Modern among a score of others -- a constellation no other part of town can touch.

Kate Krader, restaurant editor Food & Wine: Best dining-drinking hood: East Village, specifically from 14th St. to 10th, 4th Ave to Ave A. Encompassing Ssam Bar and Don Lee's cocktails; Noodle Bar; PDT; Mayahuel; Hearth; Motorino; Redhead Tavern (although underwhelming last visit?); Ko; Ippudo; Dos Toros tacos. If you expand the area a little you can also get Porchetta and Pizzeria Veloce and that veg Japanese place that people are raving about. I would also say down in Tribeca, it's a very short walk from Corton to Locanda Verde.

Matt Rodbard, Metromix: South Carroll Gardens. Prime Meats and Buttermilk Channel are two of Brooklyn’s most-exciting new restaurants, that happen to be located across the street form each other. Bonus that each have space to grow. (Hypothetical, of course).

Peter Meehan, cookbook author, Chang wrangler: Actually, I'd probably say Williamsburg and the surrounding areas. They got Brooklyn Star and La Superior, both excellent suppliers of underrepresented food styles. Plus there's Saltie, which I haven't even been to yet, but I'd wager is awesome. And both Marlow & Daughters and Mylan's new butchery outpost, which make for better at-home dining. Plus Caracas, which brings the awesome areperia count in the neighborhood to two, higher than most of the rest of the city.

Ryan Sutton, restaurant critic at Bloomberg: Best dining neighborhood. Hard to say, I eat locally on my nights off, which means East Village or Grammurray. But I'd give Williamsburg the "most improved" neighborhood. Yeah Brooklyn Bowl is kinda like Dave & Busters, but the smoked wings are pretty dope. Then you have Brooklyn Star, Hotel Delmano (full disclosure: haven't been to Delmano) and remember Motorino Williamsburg which of course is a bit older. No, it's not all as fancy as Smith Street dining, which has more of a Manhattan feel these days, and that's okay, I love Smith Street, but I've been digging W-burg more in the 2009. A bit more eclectic and cool.

Jay Cheshes, restaurant critic for TONY: Between the Standard Grill (alright its in the Meatpacking), Minetta Tavern, Joseph Leonard, and the new Denton place, the West Village became a great spot to eat well without blowing a bundle.

Foster Kamer, Blackbook and Gawker scribe: Between Minetta and Joeseph Leonard, the Village worked it pretty hard. I'm still waiting for Fort Greene to explode; no question this is going to eventually happen, and not in the way people once thought Smith Street was gonna be "Important."

Merri Lee Kinglsy, publisher of Saveur: Upper West Side, because it’s my hood.

Aaron Ginsberg, Always Eating: East Village (with the West Village not far behind)

Leventhal: It's a very rare year wherein the West Village doesn't take this one in a landslide. And, though of course it competes, the opening of Sweetiepie DQ'd the 'hood altogether. 2010 will be the year of the Bowery Corridor, but, brace, 2009 goes to MIDTOWN: Marea, A Voce, Trabocchi at Four Seasons, Breslin, Le Caprice, Monkey Bar, Casa Lever, East Side Social Club.

Steele: Chinatown. In a year of downscaling, it proved the perfect time to venture more often than before into the tangle of streets below Canal. I ate more soup dumplings at Joe's than I'd care to admit, as well as at Dumpling House on Eldridge, which had the temerity to change its pricing from 5 dumplings for $1, down from 6 for $1. Obligatory hat-tip to the two Nha Trang outposts, too, whose pork chops alone provide good enough reason to solider on into 2010.

Kludt: I found myself in Midtown way more than usual, and the additions of Monkey Bar, the new Oceana, the Brez, and Marea put it in strong contention. However, I'm going to give it to the majorly upgraded Village with its Joseph Leonard and Minetta Tavern. I had way more fun eating in that neighborhood this year than uptown, over in BK, or even in the East Village.

Want to weigh in? Do so in the comments.