Restaurant Experts Call Out the Single Best Meals of 2009

Share All sharing options for: Restaurant Experts Call Out the Single Best Meals of 2009

As is the tradition at Eater, our closeout of the year is a survey of friends, industry types, bloggers, and readers. This year, we asked the group eight questions, from Meal of the Year to Top Standbys. Top Newcomers, Top Standbys, Biggest Dining Surprises, Best Restohoods, and 2009 in One Word dropped earlier, and all will be answered by the time we turn off the lights on Thursday. On we go, in no particular order; all responses cut, pasted and unedited. 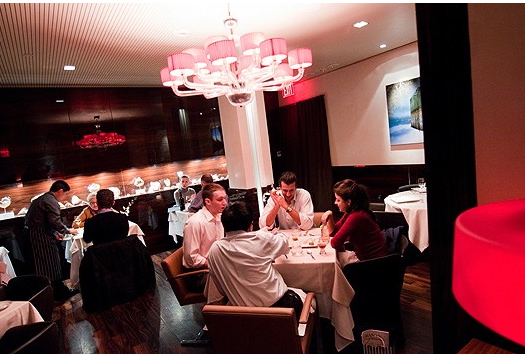 Marea, an oft-mentioned restaurant on this list and others [Krieger]

Ryan Patrick Sutton, restaurant critic Bloomberg: Blue Hill at Stone Barns, whose service and food I believe now just about equals that of Per Se, except it's not as prohibitively expensive. ($135 for tasting at Stone versus $275 at service-included Per Se). Here was the highlight of my meal: I asked the waiter for some offal, and this guy brings me friggin lambs brains. It blew my mind. It trembled on my plate. It was like eating lamb flavored panna cotta.

The Cuozz, restaurant authority at the Post: The 9-course tasting at Per Se.

Peter Meehan, pork bun authority: My lunch at M&T is up there – I finally met Sietsema! My dinner at Great Lake in Chicago blew my head off. Coi in SF was killer. Liverpool House in Montreal is still the place where I’d eat my last meal before facing a firing squad.

But best meals, for me, are about experience as much as food. Frank Falcinelli’s grandather, Otto, who’ve I’ve been to that beer garden with the gun range in Long Island with a bunch of times, turned 100, and celebrating the occasion with him out back at the Spuntino was really special. I got to eat dinner at Ko with Anthony Bourdain, a hero of mine, and that combination of food and hang was so awesome I wanted to high five myself. But the real best meal of the year was the one when I found out my girlfriend was pregnant – and I don’t have a clue what the fuck I cooked that night.

Kate Krader, restaurant editor Food & Wine: I had a crazy good dinner at Marea that included the lobster with burrata antipasti, ferratini pasta with clams and squid and chiles (which I like better than the octopus-bone marrow one) and ridiculous turbot. My favorite dishes are at Locanda, including the sheep's milk ricotta, almost any pasta, but especially the one with Sunday night ragout, broccoli rabe sausage with gigante beans. But my very best meal was at Le Bernardin with Frank Bruni for a story he did for Food & Wine - Eric ripert killed it everywhere from charred octopus with black bean sauce (Frank said something like it's chinese take out food gone to three-star heaven) to surf and turf escolar and kobe beef. Wines, and there were a lot of them, were awesome. But it was also the whole story which was Frank Bruni as the world's most difficult customer.

Alexis Loinaz, Metromix: The rib eye steak at Prime Meats. So simple but so sublime.

Zach Brooks, mayor of Midtown: Oh... without a doubt, birthday dinner at Corton the weekend before the Beard Awards. That night Drew Nieporent bussed our table, two days later he was accepting the award for Restaurateur of the Year.

Danyelle Freeman, Restaurant Girl: I'm reluctant to jump on the bandwagon, but I have to go with Marea. From start to finish, it was mind-blowing. Dinner began with a genius combination of uni & lardo-smeared crostini, followed by the burrata and lobster appetizer. If they have langoustines, order them. I had them barely seared as well as over pasta with fresh tomato, and basil. Both were divine. I finished with the affogato. It doesn't get much better than that.

Josh Ozersky, Col Sanders biographer: Lunch at Le Bernardin, with an all-Austrian wine program from Aldo Sohm. Honorable Mention: a tasting menu at Convivio, a Fat Cat eaten over a trash can at midnight in front of Bill's; my first roast chicken at Vinegar Hill house at twilight on a weekday; an ossabaw tasting menu at Boqueria.

Jay Cheshes, restaurant critic for TONY: A big family-style spread at Locanda Verde, the most memorable of the city’s many Italian newcomers, with a phenomenal team handling both savory and sweet stuff. Andrew Carmellini’s porchetta, meatball sliders, and roast garlic chicken followed by Karen DeMasco’s meringue and berry “Fantasia.”

Foster Kamer, Blackbook and Gawker scribe: Marea, for a story on Michael White I need to finish. Had it with one of my favorite New Yorkers/people/writers, Katie Baker. It was shockingly perfect in every which way; at times, beautifully subtle and nuanced (the crudo, the best dish of 2009); at others, it was White stomping all over your palate with an exceptional "fuck the rules" ethos (the octopus/bone marrow ragu). The service was perfect. I don't know fuckall about wine, it's my one dining weakness. I do know that our waitress, who both Katie and I separately almost posted Missed Connections on, poured us the best booze I've ever had in my life. Setting - for a bum writer like me not to feel uncomfortable on Central Park South - disconcertingly comfortable. We both walked out three hours later laughing from "that did NOT just happen" shock. Hell yeah, I'll say it: full fuckin' comp. And I'm spending more than my fair share of scratch giving it back to them. Deservingly so.

Leventhal: Marea's 12 course crudo and pasta tasting is menacing in it's scope and volume--and spectacular. By the third fried chicken dinner at Momofuku Noodle Bar, and with Kate Krader's help, I learned to stop worrying and love the lettuce. Every meal I had a Roberta's was pitch-perfectly local.

Steele: With apologies for giving into the conceit of the stunt-dinner, I loved both the Pig Roast Dinner I had at Hearth in August and the Momofuku Noodle Bar fried chicken feast to celebrate a good friend's wedding in November. In terms of solo dining, a random lunch I snuck at John Dory about two weeks before its surprise closing sticks out in my mind; may its oyster pan roast rise again in 2010.

Kludt: I've had spectacular meals at Minetta, Marea, and, most notably, Le Bernardin. So honorable mentions for them. But I have to give Joseph Leonard the love once again. It hasn't been the absolute best restaurant every single visit, but one Sunday when I randomly came in not expecting a whole lot, they totally, without a doubt nailed it. Try their Cochon Sundays.

Weigh in on your single best meal in the comments.