Share All sharing options for: Experts Reveal Their Biggest Restaurant Break Ups of 2009

As is the tradition at Eater, our closeout of the year is a survey of friends, industry types, bloggers, and readers. This year, we asked the group eight questions, from Meal of the Year to Top Standbys. Top Newcomers, Top Standbys, Biggest Dining Surprises, Best Restohoods, Meal of the Year, and 2009 in One Word dropped earlier, and all will be answered by the time we turn off the lights tomorrow. On we go, in no particular order; all responses cut, pasted and unedited. 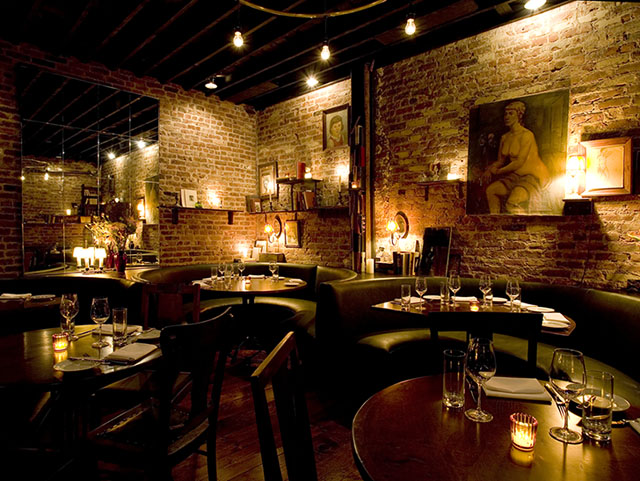 Gabriella Gershenson, TONY: The last time I went to Allen & Delancey I was pretty turned off. The service seemed so ambivalent--not a good atmosphere for dining.

Steve Shaw, eGullet: Dumpling House on Eldridge, now called Vanessa's, is off my list. They took the city's best dive and tried to make it nice, thus ruining it.

Foster Kamer, Blackbook and Gawker scribe: I moved from Astoria in March and never looked back. It's amazing how one can convince themselves there's "good" food in their neighborhood when surrounded by totally mediocre shit.

Peter Meehan, food writer, cookbook author: Dumpling House on Eldridge Street, which might be called Vanessa’s now? Man, I ate at that place like 6 million times, especially back in the day when I was poor as fuck. It has fallen off something terrible. I’ll still go from time to time, but even that beef sandwich isn’t consistent like it once was. Pour a little Tsingtao out in the gutter for a fallen soldier.

Jay Cheshes, restaurant critic for TONY: The new West Village Grand Sichuan is so inferior to the other outposts I’ve been trekking instead to the St. Marks and 23rd Street branches.

Steve Plotnicki, Opinionated About Dining: I broke up with Irving Mill after Ryan Skeen left.

Kate Krader, restaurant editor Food & Wine: Lucali. Or at least that one reservationist who calls you at Brooklyn Social and says your table is ready and then makes you wait an hour anyway on the cold freezing bench.

Alexis Loinaz, Metromix: Not a breakup so much as a bad first date: Standard Grill. Every entree was a spectacular miss. Biggest disappointment of the year.

Jeff Zalaznick, founder of Always Hungry: Shang. It started out hot and heavy, but it couldn't stand the test of time.

Zach Brooks, mayor of Midtown: Caselulla. That was our go-to neighborhood spot... but without Tia, it just doesn't feel right going back.

Robert Sietsema, Village Voice critic: Roberta's. Too many hipsters, too much expansion, too many cookie-cutter pies with too much char, too much foodie hype, by the end of the year I didn't recognize the place.

Solish: Any? Baogette, Belcourt for brunch, Westville for everything, and all the Momofukus.

Leventhal: I didn't go to Nobu once in 2009, which, based on my previous record, is nearly inconceivable. And, while it's not a breakup, Lupa and I are on a break.

Steele: Finally definitively broke it off with Supper on East 2nd. Always love the vibe, but the food quality had slipped beyond recognition. And so a small piece of my 20s descends into the earth.

Kludt: I will still be going every other week, so I won't say break up. But Motorino Williamsburg is on thin ice with me. Two of my favorite sauceless pies, while still delicious, have been criminally over-cheesed on the last four visits. I have faith that someday we can get things back on track.

Have a traumatic restaurant break up story? Share it in the comments. We're all friends here.