Remembering When There Was An Italian Four Star in NYC

Share All sharing options for: Remembering When There Was An Italian Four Star in NYC

There's been a lot of talk these days about the potential of a new Italian four star restaurant in New York. Many hoped Frank Bruni or his successor Sam Sifton would give the honors to Michael White's newest, Marea. Joe Bastianich and Mario Batali trying to get one by force of will over at Del Posto. But it should be mentioned that while the coronation of a new Italian king would be big news, it will not be a first. Today, a reader sends over a pdf of a 1975 review for Parioli Romanissimo, in which then critic and noted curmudgeon John Canaday awarded it a coveted four stars. In 1976's New York Times Guide to Dining Out in New York, Parioli had just four peers in its category: Christ Cella, La Caravelle, Le Cynge, and Maxwell's Plum, all closed.

Just four years later, the restaurant lost two of its stars, had one restored by Marian Burros in '84, and then lost it once again with reviews from Bryan Miller and later Ruth Reichl, who, a decade apart, called it one of the most expensive restaurants in New York. Regardless, for a time, there was an Italian king.

Canaday also takes the review as an opportunity to redefine the star system and to mention that New York will probably never have a restaurant good enough to earn three Michelin stars. 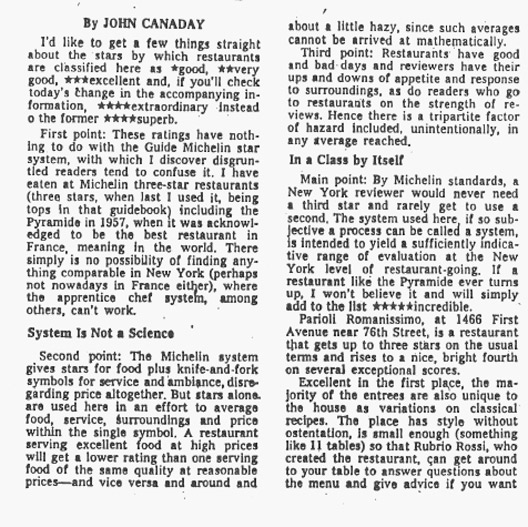 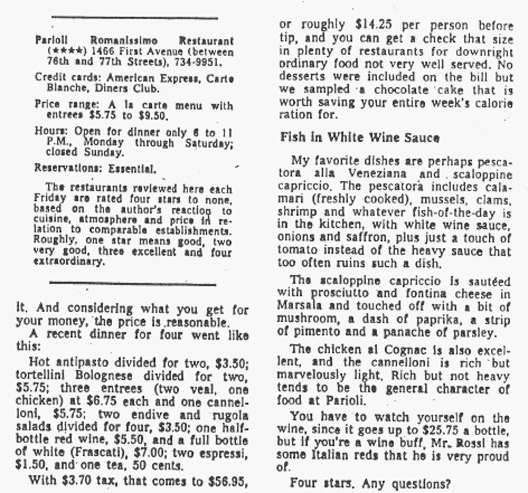 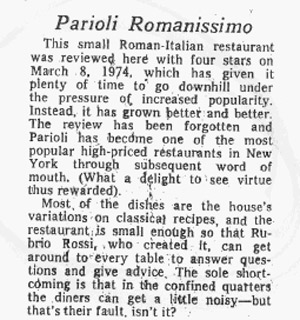