Naming the Top Restaurant Standbys of 2009

Share All sharing options for: Naming the Top Restaurant Standbys of 2009

As is the tradition at Eater, our closeout of the year is a survey of friends, industry types, bloggers, and readers. This year, we asked the group eight questions, from Meal of the Year to Top Standbys. Top Newcomers dropped earlier, and all will be answered by the time we turn off the lights on Thursday. On we go, in no particular order; all responses cut, pasted and unedited: 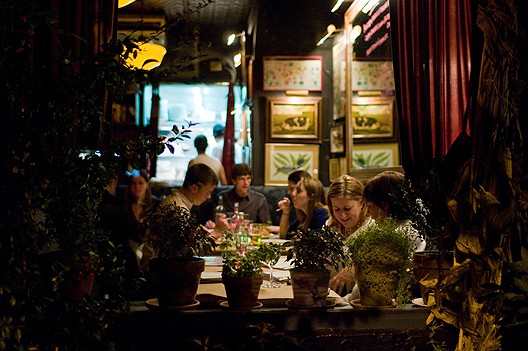 Peter Meehan, food writer, cookbook author: Oriental Garden, Polish G.I. Delicatessen, Grand Sichuan St. Marks, you know, the classics. The Korean bbq place at 32 west 32 and the soup place on the third floor above it. There is also a Brooklyn-based chain of Italian restaurants run by these bearded Mennonites that I spend way too much money at and an East Village group of Asian fusion restaurants that I very much enjoy.

Ryan Patrick Sutton, restaurant critic Bloomberg: Convivio, Inoteca, Momofuku Noodle, Fatty Crab UWS and Swinbelly's BBQ in Long Beach (where I write my column every weekend. Their smoked-then-fried chicken wings are the best I've ever tasted). Note that none of these are brand new, stand-alone venues that opened up in 2009. That says something. (Inoteca was just a revamp; I still call it Bar Milano; Fatty Crab is a sequel).

Zach Brooks, mayor of Midtown: Newborn baby = no standbys (unless delivery in Hell's Kitchen counts.) Besides, eating at the same place twice in one year would have been a huge waste of a babysitter! But if I could have had repeats, it would have been Ssam Bar. Always Ssam Bar...

Danyelle Freeman, Restaurant Girl: I should get a Yakitori Tory credit card. I'm obsessed with all of their restaurants, especially Aburiya Kinnosuke & Yakitori Totto. I also love The Standard Grill and Minetta Tavern when you can actually get a reservation. I also love the beer selection at Bia Garden.

Josh Ozersky, formerly the overlord of The Feedbag: My favorite five restaurants are now, in whatever order, Le Bernardin, Alto, the front room of Gramercy Tavern, Minetta Tavern, and Di Fara. So what? Everybody says those places. It's the big list of second-order standbys that tell your tale. Mine are Perilla, Dovetail, Convivio, Marea, Boqueria, RUB, Roberta's, The Carnegie and Katz's, Café Boulud, Terroir, Primehouse, and Kefi. My short burger list is: little owl, bill's, shake shack, hb burger, RUB.

Foster Kamer, Blackbook and Gawker scribe: There're the places I wish I could get around to more: for a while, I dropped way too much cash at Standard Grill and Joseph Leonard, which has never, ever not been anything but a great night of dining, and then Ssam Bar's late night bartenders, who are just consistent, but sure enough, the place I'm eating from more than any these days: Sel De Mer. And by "standby" I mean "their takeout has kept me alive." Seafood shack on the Graham stop sans frills - not even a lobster roll, because they wouldn't even pretend to be in that game - just great specials every night, no filler, no attempts at innovation, just a neighborhood joint with awesome, solid food every night, on the cheap, without fail. Also: my new favorite burger in town. Everyone in there are wonderful, awesome people, and a total neighborhood crowd. Which reminds me: I need to get them a present. That's the affection I feel for them. They probably think I'm insane.

Oliver Strand, food writer: Roberta’s; the prix fixe at Matsugen; Pizzeria Veloce; cold soba at Soba-Ya; those damn Momofuku pork buns, which still seduce me after all these years; a Vietnamese joint in Chinatown that’s my secret.

Steele: I've sung the praises of Schillers one too many times (though this year's upgrade to the steak frites cut at weekend brunch was welcome), and of course Lure (watching a chef tote around a giant check never gets old), so how about some love for Rhong Tiam, which, despite affiliation with the dearly departed Kurve, serves up one of the best delivery deals going in the Central Village.

Kludt: Motorino has been replaced by the excellent newcomer Sel de Mer in my low-key weeknight East Williamsburg rotation. Frankies always belongs on this list, as does Noodle Bar. I would say Ippudo, but it's so frustrating to eat there that I give up. And I've been to Baoguette more than I'd like to admit.