In a long article chronicling the decline of Gordon Ramsay's fortures this summer, the Wall Street Journal revealed that after shutting down lunch service in his New York restaurant Gordon Ramsay at the London, removing flowers, and adding a $65 pre-theater prix fixe to attract more traffic, he was still $5,000 short of breaking even each month. Fast forward four months, and a court source tells Eater he is currently being sued by vendors for upwards of $100,000.

Thus, it's not a huge surprise that economic realities have led Gordo to transfer ownership of the sinking ship to the restaurant's hotel, as he did earlier this year in both Paris and LA.

On November 22, The London NYC took over as owner and manager of Gordon Ramsay at the London, but as is the case with some of his other properties, the space will keep the Ramsay name (and the two Michelin stars that go along with it). It is presumed that Gordo will obtain some sort of licensing fee, but don't expect to spy the foul mouthed chef anywhere near Midtown.

Here is a letter sent to all vendors last month: 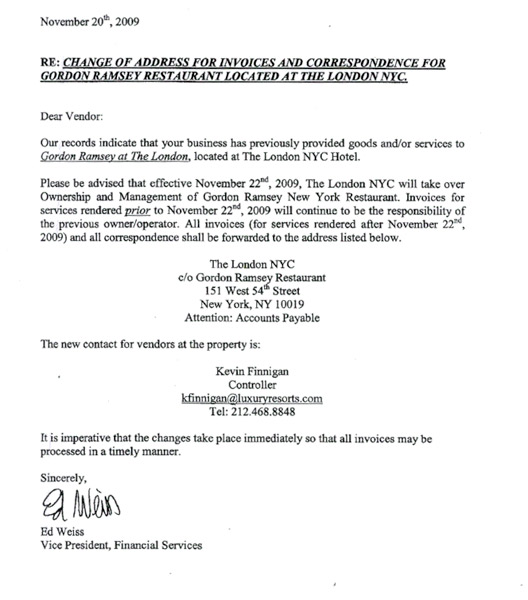 Oh, and it should be noted that the TV chef invested $3 million of his fortune into the project when it opened back in '06.
· Gordon Ramsay Sells his Sinking Hollywood Flagship [~ELA~]
· Reality Check Please [WSJ]

Gordon Ramsay at the London