The 35 Year-Old Inagiku, Willy's, and More Bite the Dust

Share All sharing options for: The 35 Year-Old Inagiku, Willy's, and More Bite the Dust

Welcome to the weekly Shutter. Know of any other restaurant that has met its demise? Let us know. 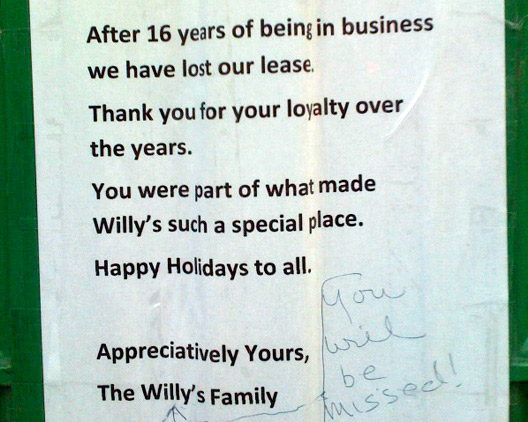 1) Upper East Side: Willy's, a 16 year-old neighborhood bar on 80th and 2nd Avenue, has lost its lease. [ShutterWire]

2) Midtown: Inagiku, the sushi restaurant located inside the Waldorf Astoria, closed at the end of November and has no plans on reopening elsewhere. When it opened back in 1974, Inagiku was the first sushi restaurant in Midtown and a standard bearer of sorts for the area. It kept up the quality over the years, but it appears that business fell off. Another old timer bites the dust. [ShutterWire]

3) East Village: EV Grieve shares the sad news that Panache Cafe, a short lived restaurant on Avenue B between 11th and 12th Street—a.k.a Where Restaurants Go To Die—has closed. [EVG]