Bill's, In the Steps of Top Chef, Sushi UO and More

Share All sharing options for: Bill's, In the Steps of Top Chef, Sushi UO and More 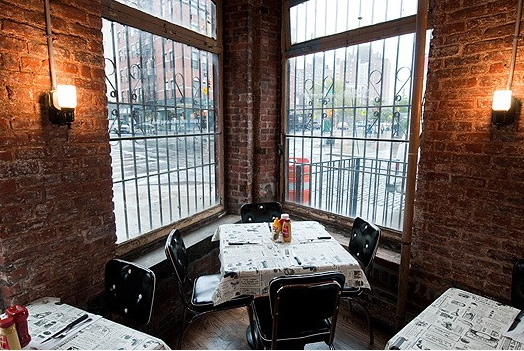 Today, the radar detects shills coming from postings about the In the Steps of Top Chef walking tour, the much talked about Bill's Bar & Burger, The Next Iron Chef, and LES newcomer Sushi UO. On to the fun:

There are people that really just love their burgers and can't get enough of them. Then there are those who are so overzealous that it become suspicious. Recently, an Eater user posted four times in two weeks on the much talked about Bill's Bar & Burger. Given the space already has more buzz than it needs, chances are this is just a superfan:

The burger at Bill's was perfect shack style smashed burger, the bun was well buttered, and the disco fries were delicious and surprisingly not disgusting (as disco fries so often are in nyc). seriously, i ordered a second burger after eating my first (this was of course a mistake and totally unnecassary). but the burger was just frikin' spot on man. no complaints at all. i wanted to hate, but i didn't...

Went back today to see if Bill's was as good as my first visit on monday [...] I had same exact thing as last week. and the good news- pretty much exactly the same, just as good [...] overall, still absolutely delish and prices are super reasonable. burger was great great great. enjoy SM

Finally, others picked up on what was going on, crying out shill. His defense:

man, no offense, but i am SO not a shill. i'm a food nut, i've posted on roadfood and chowhound forever (as frankbooth), and just signed up for an eater account, though a longtime reader [...] i really dug Bills. not sure how to prove to you i'm not a shill, but i'm not! my board name is short for "Strammer Max"- look it up and you'll see i'm just a foodie geek...

Next up, Sushi UO. After three lacklaster reviews, four raves pop up on Menupages in two days. One fan:

Loved the atmosphere and service. The Chef, David, was extremely attentive and super intuitive in creating one of a kind specials! Very fresh ingredients which you can see being prepared if you decide to sit at the bar, which in my opinion is the best seat in the house! Go Sushi UO! LES needed a great tasting and reasonable sushi restaurant!

An Eater commenter weighs in on the unauthorized In the Steps of Top Chef Tour, giving a suspicious level of love across the board:

I've been on this tour, and it's fantastic! Even if you are not a fan of the show, the food is great and it's a lot of fun. Our tour guide Nicole, was great! And we even got to meet Nikki Cascone from Season 4. Everyone should check it out! Oh, and where the chefs shopped was Dipalo's and other cool places, not Whole Foods! LOL!!!

Finally, a guest commenter pens what essentially reads like a insanely lengthy press release for The Next Iron Chef, which stems from the fact that it's probably written by either a PR agent or the president of the Chef Mehta Fan Club:

The Next Iron Chef is much more popular than the original Iron Chef. A record two million viewers watched the premiere! That says a lot about the quality of the chefs involved in the show. NIC has managed to keep the audience entertained through a series of difficult challenges and battles. I especially loved the last challenge which was all about adaptability [...] The chefs had to also make a surprise cocktail in the last 7 minutes of the challenge! Talk about pressure! Chef Mehta hit a home run with this one! [...] I wish he continues his winning streak and becomes the Next Iron Chef! I can’t wait to see how he has performed this week. The show this week is all about “pressure”. I have heard that there is going to be a double elimination!