Top Chef Episode 12: The Ghost of Dick Blais Past

Share All sharing options for: Top Chef Episode 12: The Ghost of Dick Blais Past

To thoroughly enjoy the glory that is Top Chef, we welcome back comedian Max Silvestri, who is here every week to take us through season six. 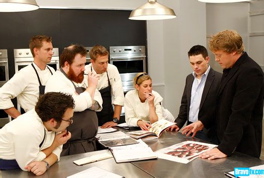 Can you believe how far we've come? I say "we" because in some ways just watching this season we've all worked nearly as hard as the cheftestants. Or at least I have. Do you realize how long these recaps take to write? I have to watch each episode four to 12 times, filling multiple Moleskines with every pass, and then I spend eight hours storyboarding, animating, writing, and editing. My butt is not big enough to hold all the Adderall I need to jam up there to finish these! "We're gonna need a bigger butt." That is a quote from Quint, played by George Bernard Shaw, in the hit film Jaws. But I am kidding. Positivity and optimism is my speed. I am also kidding about my butt not being big enough.

The five remaining chefs are worn down by the time spent away from their families in the house and the losses of their fellow competitors. Except for the loss of Robin. What's the opposite of worn down? Buffed up? Robin's exit has buffed them all up! As they prepare for their final challenge in Las Vegas, they reflect on their lives outside Top Chef, as if there is such a thing. Bryan's bottom line is hit by presumably lower attendance at his restaurant, because clearly people primarily dine there to see his huge and magnetic personality in person. Kevin misses his wife. And while Eli does not explicitly say it out loud, Eli clearly misses the special lady in his life, the woman of his dreams. (Rhymes with 'Scrom'.)

The bombshell here is that Eli reveals that his mentor is—wait for it—Richard Blais! Yes, that Richard Blais! The Trail Blais'er himself. This is so huge for me and I'm blown away we are just learning about this now. I am a MEGA Blaishead. No joke, his Twitter is the only Top Chef contestant's I follow. He is the Diddy of molecular gastronomy. "Ever want to grab a guitar and bang out the baseline to Hotel California?" Hell yeah I do, Blais. Let's go! Eli, aka the Blaisin' in the Sun, says that he's here to win it for Dick Blais. He says that it's sort of a "Hello my name is Inigo Montoya, you killed my father. Prepare to die!" situation. Only he says "Indigo," which is adorable. "My name is Indigo Mom Toytime, you killed my father. Prepare to love my mom!"

Padma arrives with hot shit young chef Gavin Kaysen, exec chef at Cafe Boulud, America's representative at the Bocuse d'Or a few years back, and winner last year's James Beard Rising Star Chef award. Smokin'! Gavin gives some background on Bocuse d'Or, a cooking competition that is the culinary equivalent of the Special Olympics. His dish was a ballotine of chicken stuffed with foie gras and crayfish, sort of a Crayfucken. For this week's Quickfire the chefs must prepare their own protein within a protein within a protein. We finally have a turducken challenge. I wish John Madden were here to judge it, and I wish he was allowed to draw on the screen with an electronic pen. If I were him I'd spend a lot of time circling Padma. "Enhance. Enhance. Enhance."

As has been the case over the last few weeks, the breakdown of cooking goes as follows: Bryan and Michael make very complicated things which demand precise technique, Eli and Kevin cook home-style food defensively, and Jen is a nervous wreck and makes seafood. I hope it goes better for her this week! With the caliber of chefs still in the running, there is no room for hysteria. Is hysteria a sexist term? I'm sorry if it is. What I meant to say is that she needs to stop being crazy because of her womb. I am kidding! Who am I, Mike Isabella? I need to pack my yogurts and stuff and go home.

Michael says of Jen, "There is not a whole lot left for her to do." Padma disagrees. "Welcome back," she says after trying Jen's calamari, scallops, salmon, shiitake and shiso and rice noodle salad. And despite her dish looking like a sandwich a homeless man would make after pawing through the dumpster at a Long John Silver, it wins handily. Bryan and Eli both get kudos as well, but Kevin and Michael aren't really in the mood for criticisms from Gavin. Gavin thinks Kevin's catfish was a little over done and a little dried out. Kevin respectfully disagrees in his head, although earlier Kevin said he too has been up for Rising Star Chef and "knew of Gavin." Not respected, knew of. Clearly Kevin admires Kaysen about as far as he shotput him. (Can you admire someone a distance? I am evolving the English language over here.) Michael's "poultry terrine" dish is well-executed, but Gavin says that being it's a terrine, it sort of missed the spirit of the contest. Michael seems to want to wrap that contest spirit around a wooden dowel and force Gavin to sit down on it hard.

It's too late for a Quickfire win to grant immunity, therefore Jennifer wins herself thirty extra minutes in this week's Elimination Challenge, a Top Chef Bocuse d'Or if you will, and I will. The chefs must create a regal presentation platter with one protein, either lamb or salmon, and two intricate garnishes. And the garnishes have to be on the level of, say, weaving zucchini into a basket and then filling that basket with stuff. That is more or less the example Kaysen gives. Huh? That does not sound good to eat. Shouldn't foods be things that are good to eat? "My garnish is a bread hat filled with boiling hot prawn chowder. It should be eaten by putting the hat on your head and letting the prawn chowder pour down your face and shirt. It's a play on second degree burns. Bon appetit!"

This week's judges are pretty esteemed, including the son of Paul Bocuse, Daniel Boulud, and the last great white hope for American cooking, Thomas Keller himself. While the chefs prepare their dishes, Keller joins Tom in the kitchen to provide some gruff and daunting inspiration. I don't remember what he said as I was so distracted by how tall Chef Keller seemed standing next to Tomwise Gamgee over there. 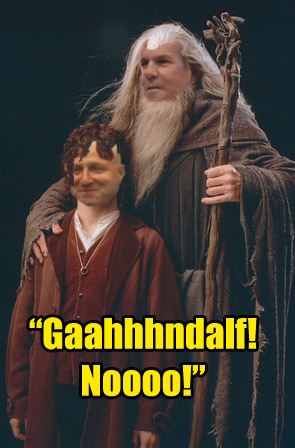 All the chefs, even those normally cool under pressure, struggle to remain calm in the face of the overwhelming talent at the judges' table. Michael's the only one with competition experience, but of everyone he seems to blow the conceptual portion of the challenge the most. He's got a lot to say about "Mediterranean flavors" but no one's buying it. The flavors are disparate and the theme is shaky at best.

The most fun part of watching the meal, to get real for a second, is how openly critical and difficult the diners are in this episode. They ask tough questions! They don't pull punches! We always get some harsh words, of course, but with guest judges there is occasionally an inclination to be pleasant, or to not seem dumb by saying something that might disagree with the more experienced hosts of the show. Here that's turned on its head. Keller and Boulud tower over Gail and Padma and Tom, and they seem to feel a responsibility to the representatives of the Bocuse d'Or, an establishment they clearly revere, to show how seriously they take that championship and its standards. In fact it is Tom and Padma who end up defending their contestants, perhaps to save face? Intrigue!

Jerome Bocuse sits with Gail and Padma and Tom at the judging table, and all five chefs are called in to defend their dishes. No top and bottom this week. Bryan's lamb was slightly underdone, but the judges pay him the compliment that they all feel with more time, his dish would have been on the top. Kevin's dish was well-cooked, but perhaps was too simple and too safe given what point it is in the show and how long he had to cook it. Jennifer's salmon was cooked unevenly. Eli's plate was conceptually sound, but his merguez sausage was undercooked with tough and inedible strings of fat running throughout. Michael's dish clearly was big on technique but a bit light on concept. Not to mention one diner found a bone in his salmon, grounds for instant Bocuse d'Or disqualification.

As the chefs head back to the janitor closet to wait for the judges' decision, I can't help but feel this is the best elimination challenge in memory. Gimmick-free, classical and straightforward, these chefs all did great while honestly I could see nearly any one of them going home. No one is safe! That's so fun.

Earlier in the episode Michael remarked, contemptuously, "The food that Kevin cooks is the food I cook on my day off." Well, Michael, you must cook really perfectly-cooked delicious food on your day off, and maybe if you brought a little bit of that vacation kitchen spirit to your dishes, you'd win. Instead, Kevin wins $30,000 and a chance to be on next year's Bocuse d'Or Team USA. Amazing! Way to do it, you beast.

Not too surprisingly but still somehow surprisingly, Eli is sent home. We will all miss him. What a good sport. You and Blais both made it to the Top 5, and that's something. Get on Twitter. Let's be friends. 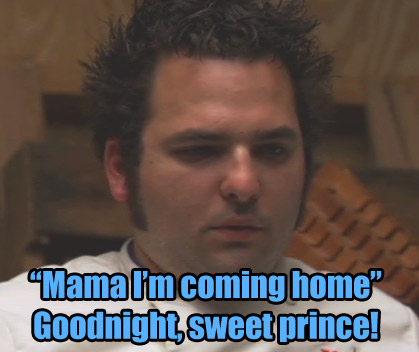