Sifton Heads Back to Midtown to Tackle Oceana

Share All sharing options for: Sifton Heads Back to Midtown to Tackle Oceana

Welcome to Sift Happens, the latest in a long line of offerings for Times dining section junkies in which we preview and handicap tomorrow's restaurant review. 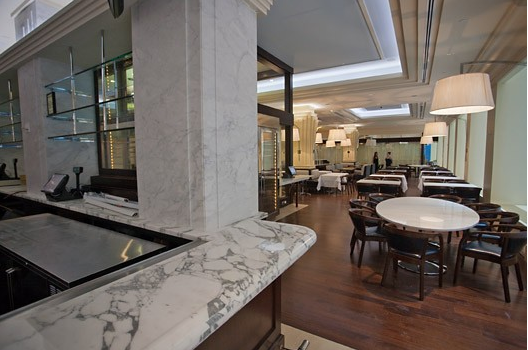 Following his slam of the new iteration of Aureole, wacky Times restaurant critic Sam Sifton heads back to Vegas tomorrow with a review of another shiny Midtown behemoth. Again, it's a relocation, this time the three starred Oceana, a restaurant that survived many a rereview in its old townhouse.

PLAYBOOK: Over the years, Oceana has come to been known as one of New York's finest seafood establishments, up there with its Midtown neighbors Le Bernardin and Esca. The assessment was confirmed by Bruni's glowing threespot last year, a rating the owners are desperately hoping they will still have tomorrow. The problem with the relocation however is that much has changed. Not only is the airplane hangar-sized space much bigger than the original, some critics contend the food has gone from exhilirating and "vital" to "user-friendly" and "uneven."

SIFT HAPPENS: If chef Ben Pollinger's performance was at its best during Sifty's visits, they should be able to hold onto the trey. However, if Sift Happens, if he had meals like Plattypants', and if he wants to make a point about their lofty pricepoint, there could be another one star slam coming down the wire.