Grub Street notices the twitters above and below (language, Ryan!), and correctly wonders if the volatile chef's days are numbered at his restaurant du jour, Allen & Delancey. It's the kind of public insubordination that would probably be a firing offense at any high end restaurant, but since A&D hasn't had the best of luck with chefs, they're probably in no position to give him the boot. As far as Rye-Rye's reputation is concerned, this combined with his flightiness (this is his fourth gig in two years) isn't the best for resume building. 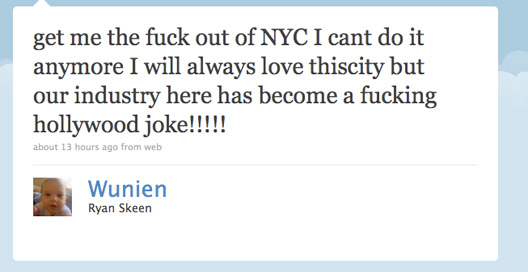