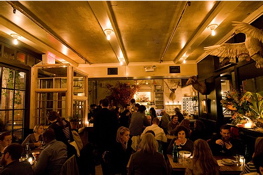 Yesterday evening Community Board 3 convened to determine the fates of restaurant owners seeking to obtain, renew, or keep their liquor licenses. Throughout the course of the five-hour event, some got an earful while some were praised, and in the end, only a few came out empty handed.

1) The owners of high end, pricey but gorgeous Doyer St. cocktail lounge Apotheke were greenlit for their proposed Pulqueria on 11 Doyers. The place will be fashioned after the traditional Mexican restaurants for which it takes its name, serving up tacos, drinks, and one would assume pulque in a restaurant setting. Update: The pulqueria will be opened by parties behind Apotheke and Burger Shoppe in FiDi but will not involve Albert Trummer and his cocktails.

2) The most comical and contested app of the night was (nonshocker) Le Souk’s, which was under renewals with complaint histories. The saga of Le Souk ‘s SLA troubles is a long and convoluted one, so suffice to say that for the last five years the place has been in shaky territory, to the point that they’ve lost their liquor license a couple of times already. Seeing no improvements from the owners in addressing noise and traffic complaints, the board chose to recommend a denial of the place’s renewal, which should come before the board at some point in the near future. For the full detailed account, see here.

3) The Freemans team was in to apply for an extension of their liquor license to the private party/waiting area space being built above their restaurant. In a back and forth that ran for close to an hour, three seriously pissed off neighbors hammered home the point that the restaurant has been less than proactive and considerate when it comes to rectifying noise issues in the entrance alley. In the end, the first motion to pass the application failed, and when the tie couldn't be broken, the app was technically denied. William Tigertt's tweeted thoughts on the matter here.

4) Cienfuegos restaurant (95 Ave. A) was the rare case of a new app within a resolution area receiving unanimous approval from the board. The restaurant’s team, which consists of Luis Gonzalez (ex-Mercer Kitchen) and Death & Co. and Bourgeois Pig operatives, knew exactly what they had to do to sway the board: they presented petitions with over 1,000 signatures, demonstrated the public benefit from having a straight-up Cuban restaurant in a city that doesn't have many of them, and stressed their nearly immaculate records.

7) Among the no-shows were Michael Hyunh’s B Clinton, Kanoyama, Inoteca, Allen and Delancey, and Cafetasia.
— Gabe Ulla
· All Community Board Coverage [~ENY~]