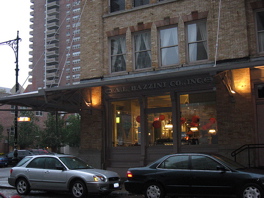 Yesterday evening Community Board 1 gathered to decide the fate of three lucky potential restaurants trying to be part of the fun down in Tribeca. In what was one of the shortest and most civil meetings in recent memory, nearly everyone went home happy.

1) It looks like the owners of the longtime Tribeca standby and the last tie to the old Washington Market, Bazzini, have finally found a new tenant to take over its space. Back in April Bazzini owner Rocco D’Amato mentioned he was looking to close the store—which he took over 26 years ago but that has existed in some form in the neighborhood for over a century—because the new Whole Foods was poaching so much of his business. And last night's meeting revealed Manhattan mini empire Sarabeth’s Kitchen will be its successor. This application went through without much discussion at all. Bubby's: get ready for a brunch war.

2) Of course, the big ticket item of the night was the application for a Tribeca outpost of Marco Canora's East Village wine bar Terroir. With the exception of a few requests such as putting speakers on the walls rather than the ceiling, the board had a love fest with the application. One member said he hadn't been to Terroir, but that Insieme was "one of [his] favorite restaurants." People of Tribeca, you're getting another wine bar.

3) Perhaps surprisingly, the most conflict came from Max Tribeca's application to upgrade their license to full liquor. The owner claims that “customer requests precipitated change” and not, you know, a desire for more money. Regardless of motivation, one of the board members who actually lives in the building was pretty cranky about the whole thing. Not only does he claim one of the doors that the restaurant leaves open is a security issue, but more importantly, a fan of questionable functionality on the roof keeps him awake at night. The kicker: "my doctor told me I need more sleep." Despite a continuing back and forth between the restaurant's owner and the board member who made it clear that they weren't best of friends, the board seemed to get past what seemed to be a personal issue. Result: Fans be damned, full booze is on its way.
—Reporting by Matt Duckor
· All Community Board Coverage [~ENY~]
[photo credit]