Share All sharing options for: Win One of Fifty (50!!) Autographed Momofuku Cookbooks

Yesterday, we started our week-long giveaway of the cookbook of the year "Momofuku," but forgot to mention that the books aren't just autographed, they're awesomely inscribed. Some have doodles of mountains and rivers, some have Larry Bird quotes, one just says "Meehan sucks." Just fyi. Anyway, we're going to switch gears today from the photo caption contest for a new idea. This time, the five readers that come up with the best names for Momofuku Midtown will win.* Send all entries to contests@eater.com by midnight.

But now, on to the winners from yesterday! 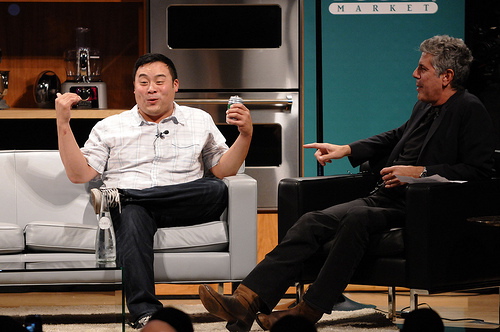 "Between you and me, it's just Cup O' Noodles"

"Bourdain, for the last time, I'm not pulling your finger." (Note, a lot of entries went this route)

"So this stoner buddy of mine looks at me and says, "hey man, now that your done eating all the cereal can I drink the milk?"

"What has two thumbs and loves pork buns?....This guy!"
* Readers must be able to pick up their prize at Eater HQ in downtown Manhattan. Momofuku Inc. has no say over the winners and is under no obligation to use the name.