Green Lights for Chumley's, The Mott, and More

Share All sharing options for: Green Lights for Chumley's, The Mott, and More 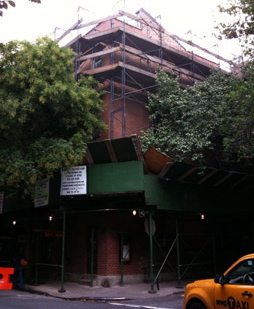 It’s that time of the month again. You know, when Community Board 2 convenes, as is tradition, in a social hall of some sort to crabbily and capriciously (OK, not always the case) mete out the fates of bars and restaurants—some new, some soon-to-be, and some in a bit of trouble with the State Liquor Authority. Yesterday’s show saw nine establishments make pitches throughout the course of four hours, and despite some familiar neighborhood jingoes coming out to shake what their mamas gave them (read: doggishly berate restaurant owners), the board was in a giving mood. Good times.

1) With the news that the Grand Hotel and Todd English's Oliver Todd applications had been laid over until next month, and that Shake Shack Nolita would not need to be present, since they’re only doing wine and beer, the future Chumley’s resuscitation became the star of the evening’s proceedings.

What could have been a contentious application ended up being pretty nice and smooth. The only bump came when a community member spoke out against the owner’s proposed weekend closing time of 4AM, something the board seemed ready to sign off on. Dude spat measured, logical, and respectful fire, explaining that the old Chumley’s management was always receptive and reactive when neighbors filed complaints, but that it would be unreasonable for them to ask for this when the old hours were 2AM, and when a destination spot such as this one generates so much traffic in such a quiet neighborhood. It was the sort of thing that reminds you why these meetings exist, and everyone in attendance seemed more than surprised. The dialogue continued until the owner agreed to operate under the old hours, with the committee inviting him to return to make his case after a one-year trial period. NB: according to the lawyer, they “have no idea” when the space should be ready to go.

2) Although the restaurant finds itself in a problem area on 173 Mott, and several neighborhood folk chose to speak in opposition, The Mott, at least in the eyes of the board, is a go.

3) Matthew Isaacs (ex Lotus) and former Union Square Hospitality Group operative Justin McManus stopped in to present for their proposed sports bar on 248 West 14th. The board gave them quick approval, even though some members expressed concern over the fact that a sports bar is the last thing this hot mess of a street needs.

4) A BRGuest and Jacques Imo’s UWS alum received approval for his space at 103 Greenwich Avenue. But, of course, he had to scale back his proposed closing times. Like the Chumley’s team, he too will be able to make his case again in one year.

5) It was unclear whether the Pear Tree Café, from the owner of Firefly and Gatsby’s, will receive a recommendation from the board. The owner didn’t budge on her proposed 4AM closing time. Her reasoning: the space on 92 Houston (formerly a Yama outpost), being below ground, is at a disadvantage, and in these tough times, she needs to be open as late as possible.

6) The Moomia team (157 Lafayette), which came before the committee to respond to community complaints, provided the night’s comic relief. The board determined almost immediately that these guys have been doing everything their original license said they wouldn’t, which has made the lives of nearby residents a misery (to the extent that the people who showed to speak provided the board with a fancy pants dossier of letters, photos, and all other manner of damning evidence against the establishment). Apparently they advertise and encourage dancing when they don’t have a cabaret license, they have not one, but two DJ booths when they’re only allowed to have background music, and they’ve racked up 78 complaints, 39 of which have been corroborated by the police. The board gave the owners a good amount of heat, but in the end, Moomia will live to see another day. Don't forget to check out their swinging website.

7) Rubirosa on 235 Mulberry was another establishment that came in to respond to complaints. In this case, one particular resident who lives directly above the space spoke at length about how difficult the current situation makes her life. The board was sympathetic and urged the owners of the restaurant to reach out and make some serious changes.

8) The folks from 1 West 3rd Street came before the board for the second time in two months, since they apparently didn’t have their act together the first go round in the community outreach department. Petitions were furnished. It’s all good.

9) The owner of Cheers on 21 Seventh Avenue got quick approval for a transfer. She’s been in business for twenty years and only intends to change from an LLC to an Inc.
—Gabe Ulla
· All Community Board Coverage [~ENY~]