Throughout the New York City Food & Wine Festival this weekend, Eater welcomes bloggers, journalists and food world stars to our lounge at the Standard Hotel. As the peeps pass through, we're going to chat them up and spit out the dialogue here in this business, From the Eater Lounge. Right now: Chairman on The Next Iron Chef, Mark Dacascos. 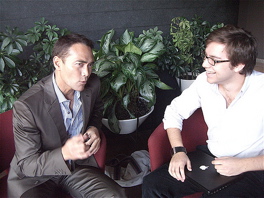 Mark, have you had any chance to attend any of the festival events yet? MD: We didn't get to go to any of the parties, so, we're spending any of the free time we have to rehearse. But, this morning we went to The Grand Tasting, people were fantastic, exciting, it was a really good time.

What do you like about being Chairman on The Next Iron Chef? MD: Of course, being the judge on Iron Chef America—it spoiled me. Even when you go to a great chef's restaurant, they're not there, whereas at Kitchen Stadium, they're doing everything themselves. On the show, the chefs give you these amazing descriptions of the food—people like Mario Batali give you this amazing history. So, the show has given me, and the audience, a better appreciation of how to cook well. Food is so cultural, and it brings people together.

So, right now you must know some things about The Next Iron Chef that the audience doesn't know. MD: Just demographically, the premier of The Next Iron Chef was the most highly viewed premier of any show, ever, in Food Network history. People know that we've chosen some world-class chefs, and not only do we get to see their cooking skills, but you get to see their food.

Iron chef is unique for its theatricality, but what is special about seeing a taping of the show, live? MD: You ask Bobby Flay, and he says it's the most difficult one hour as a chef. We go 60 minutes to the second, you can see, the chefs, they're feeling it - you can see them stretch, they're putting their honor on the line.

What else is on the horizon aside from Iron Chef and the Food Network? MD: Well, I'm on the third week dancing of Dancing With the Stars. They've started naming me "The Cha Cha Charmer".

What's fellow contestant Tom Delay like? MD: Actually, I was very charmed by Tom Delay. Very Charming, such a gentleman. He had two broken feet, but he danced his last dance, he made it through!