Throughout the New York City Food & Wine Festival this weekend, Eater welcomes bloggers, journalists and food world stars to our lounge at the Standard Hotel. As the peeps pass through, we're going to chat them up and spit out the dialogue here in this business, From the Eater Lounge. Right now: Vietnamese conquistador Michael Hyunh. 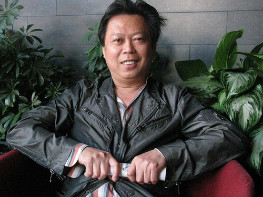 So what's the restaurant project tally for you? MH: Six restaurants right now. Bar Bao, three Baoguettes, Bia Garden, and O Bao (which will be ready in 10-ish days).

Wow. I’m a contractor, too. And an architect. I don’t have to hire anyone but my workers.

What about Spot, your new project with Pichet Ong? MH: Yes, on St. Mark's Place. Pichet is in Australia, will be coming back in a few days. The space is 95% finished. About two weeks out, maybe.

And Baoguette FiDi? We’re only working on that one on the weekends. Trying to finish my important projects first. Very soon, I can push the guys. Maybe two weeks. But we'll see.

And B Clinton? I was playing with some names. Bao Clinton, but then I said "no." B Clinton makes people think Bill Clinton.

What will the food be like? Like American/French/Asian. 29 dollars for three-courses. One of my chefs, he worked at Town. He has a three-star reputation. He spent two years with me in Vietnam. He understands my idea very well.

Any other upcoming projects? A burger shop is next. On Rivington and Ludlow. We're taking over the Rush Hour space. It'll be burgers with an Asian touch. Everyone's making burgers, so there's too much competition, but it’s gonna be fun.

What will be the Asian touch ? Maybe some Sriracha sauce on the side. We'll see. Does it have a name? I’ve been playing with some names. Baoger, maybe.

Projected opening? We have one month free rent, so we want to open it before that ends. Rush Hour is closing down tomorrow. So I will brainstorm with my staff for the next few days. Maybe there'll be a MacBao [Laughs]. I grew up upstate, making burgers at a diner. So this is not new to me.

What about Spike? MH: I asked if I could buy his franchise. He said "No." I’m actually looking for a space for Spike.

Is there more? MH: Actually I'm working on something in Oakland, too. Nothing casual, I want to do something very nice. I want to bring something nice if I go west. We’re working on a lot, but we don't want to say. Some more O Baos, three of them, actually. And of course Baoguettes.

What is the story with O Bao? MH: All sorts of Asian noodles. But they'll be a little bit more refined. It'll be a 10 dollar price point. Full liquor and everything.

This has been a wild year for you. And it's sort of happened all of a sudden, right? I'm trying to work hard. Opening a restaurant is like a gamble. But you get better and better as you practice.

When you’re hot you need to keep gambling? Yes. And there are lots of spaces now available in the recession. The owners tell me, "Take everything, full liquor license." It’s not like before, when it was harder. In the next three months I actually think it will be harder to get spaces.

You think that's a sign of things looking up in the industry? Yes, people are getting smarter and in the next six months it won't be this easy.

Maybe you won’t be as fast to expand next year. MH: Yeah, I don't think so.

What about a Baoguette in Brooklyn? MH: We’re planning on it, maybe Williamsburg.

And you're working on a high end concept? MH: Yes, it'll be a small, maybe two star quality place with 80 seats.

Have you picked a location? It'll be on 62nd and 2nd Avenue.

Anything else? MH: A spot on the waterfront in Williamsburg. 6,000 square feet. We’ll turn it into a beer garden. Karaoke downstairs. Seafood market, asian style. On North 5th and Kent. We’ll pay for your water taxi.