Share All sharing options for: Q&A with Masaharu Morimoto

Throughout the New York City Food & Wine Festival this weekend, Eater welcomes bloggers, journalists and food world stars to our lounge at the Standard Hotel. As the peeps pass through, we're going to chat them up and spit out the dialogue here in this business, From the Eater Lounge. Right now: Iron Chef and tuna wrangler Masaharu Morimoto. 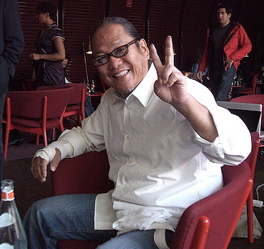 What happened to your hand? I have two stories. The first one is that lions attacked a group of people and I jumped in the cage in order to tame the lion and it bit my arm and broke it. The other is that I went to Montauk and was trying to reel in a giant tuna and the tuna bit my arm. Whichever story you’d like.

What have you been up to at the festival? Well, I have a demo today at 4:30. I actually taught a sushi class yesterday. How’d that work with the hand? I brought somebody else in to physically lead the class and I was there talking.

Can you tell us anything about the Tribeca space? I’m trying to do it, but there’s not much I can really say about it. It’s going to be a little more casual than Morimoto.

What’s going on in the future for you and Morimoto? I’m also going to be opening a Morimoto in Hawaii and it will be in a hotel. They’ll also be a freestanding one in Napa. I’m also working on some other interesting things. Trying to find new fish to bring in from Japan.
· All NYCWFF Coverage [~ENY~]