Share All sharing options for: Q&A With Buddakan's Lon Symensma

Throughout the New York City Food & Wine Festival this weekend, Eater welcomes bloggers, journalists and food world stars to our lounge at the Standard Hotel. As the peeps pass through, we're going to chat them up and spit out the dialogue here in this business, From the Eater Lounge. Right now: Lon Symensma, Executive Chef at Buddakan. 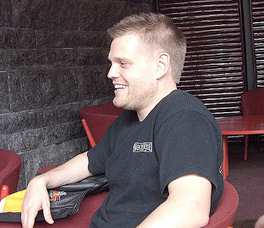 So Lon, what's going on at Buddakan right now? LS: Working on some fall dishes, new salads coming on the menu—we're in transition right now with a new pastry chef. We just hired a pastry chef who worked with Bobby Flay. She went to France for a while, just kind of playing around with some dessert ideas.

Over the past few months, do you think that restaurants in the Meatpacking District have seen any bump in business because of The High Line? LS: I think Morimoto has seen more business from it. We've always been busy, so I don't know what in the neighborhood is helping things. We might do maybe 100 more covers a night.

How many covers do you generally do a night? LS: We might do 1,100 covers tonight.

For people that are going to Buddakan soon, what dishes do you recommend? LS: We're introducing the chili crab next week—it's going to be great. The fall salad with pears and Brussels sprouts, sort of more of a regional ingredients dish with a lot of Asian influence, is also going to be great.

So what else is going on at Buddakan right now? LS: We've started working with Bullfrog & Baum, which is a great PR company, so, they're great, they're very aggressive. I'm going to be on Martha Radio next week. I think it's important to do enough to stay right there with what's going on. I would love to be a judge on Chopped, I'd love to take on Morimoto in Iron Chef. I'm going to do the Early Show in November.

Would you ever want to do a TV show of your own? LS: I wouldn't mind being on other people's TV shows. But, someday I would really love to open up my own place. I think I'm a little more into traveling and cooking, as opposed to TV stardom, but I want to be competent and good enough at public speaking to be good enough to go on shows.