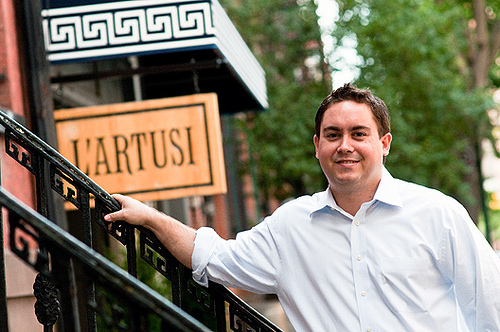 West Village: When Joe Campanale and Gabe Thompson opened L'Artusi late last year, many saw it simply as their follow up to the wildly successful dell'anima. In a way it was, but the restaurant quickly proved itself to be very different. For starters the space is larger, louder, more casual and has lower price point. All of these factors mean more chances to get a shot at eating Gabe's food. But even with nearly double the capacity of dell'anima, L'Artusi can be booked weeks in advance. To break your way into the Campanale/Thompson empire, you'll have to see Kevin Garry for a table.

Kevin Garry, General Manager: We have about 110 ten seats total. And a PDR? Yes, we can fit up to about sixteen in our private dining room.It's 8p.m. on a Saturday night, what's the wait for a table? It all depends. Generally, it will be about forty five minutes to an hour. We usually tell most people to give us a call fifteen minutes out and we can give you a better idea of what's going on.

What can I do to make my wait shorter? The best thing to do is to just be nice. We're a neighborhood restaurant at the end of the day. We like friendly people....How about gifts or cash to speed things along?

Do you have any favorite customers so far? This neighborhood is fantastic for sustaining restaurants and there are so many great neighborhood people who come in a couple of times a week. Having dell'anima as our original restaurant and that being such a neighborhood restaurant and having a lot of those regulars come to L'Artusi is great because they're just people like us. They just want go out to eat and have a good time with a good glass of wine. They're nice as can be and we love having them. How about celebs? It's New York City, so we do have some.

What's the most outrageous request from a customer that you could accommodate? We had a birthday party recently and someone had booked a Howard Stern impersonator and a lounge singer. They had the entire second floor and it was quite an event. So there were other customers downstairs? Yes, and I'm still convinced that half the people here actually thought it was Howard Stern.

What's the most outrageous request from a customer that you could not accommodate? Basically, based on numbers and last minute requests, sometimes we have trouble booking really large groups. How do you deal with VIP's, when there are no tables left to give? The thing we try to do, especially if it's a regular, is we offer them a seat at the bar. We don't reserve the bar area, it's about thirty seats. Other than that, we honor our reservations, but we do our best to take care of our regulars.

Have you found it challenging that a lot of people come in here with the expectation that you're going to be dell'anima 2.0, when you're really a pretty different restaurant? It was initially, because I think that a lot of people expected that cozy vibe and atmosphere, but I think that we've been successful in developing our own identity as a separate restaurant that has roots in dell'anima—same chef, basically the same kitchen staff, same owners. But the food is somewhat similar, but the vibe is completely different.

What's the one Gatekeeper tool you need to do your job? Without a doubt it's my team at the front door and on the floor. I come from a Danny Meyer restaurant, I worked at Gramercy Tavern for five years. The whole notion of the team kind of working together, being empathetic and being on the side of the guest is by far the most important thing to welcome people in the door and make sure everything goes smoothly.

When you're not at L'Artusi, where are you eating? I had a fantastic dinner at Tabla Upstairs last night. I go back to Gramercy a lot. You'll usually see me at a Danny Meyer restaurant or in line at Shake Shack. I like to go to dell'anima a lot after work. I feel really comfortable there and the food is delicious. Although, now that I live in Brooklyn, I'm exploring a lot of restaurants out there as well. What are you liking out there? One of my favorites is Al Di La in Park Slope. When I knew that I was going to start working here I did a lot of research and I ended up having a few too many plates of pasta there.
—Matt Duckor