One Year in: Dell'Anima

Share All sharing options for: One Year in: Dell'Anima 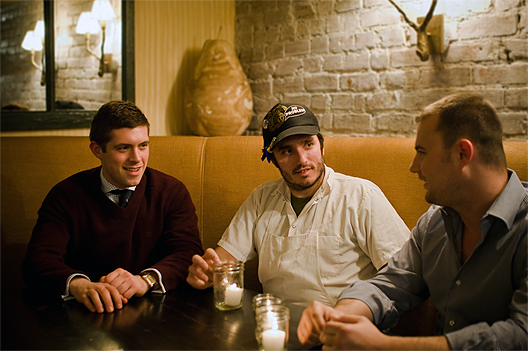 Dell'Anima opened in a small, narrow space on Jane and 8th Avenue towards the end of '07. We aren't overstating to say it's been nearly impossible to get a walk-in table since. Whether the crowds came because of the counter by the open kitchen, Gabe Thompson's Italian fare, the neighborhood vibe, or the fact that it became a fast favorite within the food industry, the restaurant's success led the original partners to expand to the month-old L'Artusi just one year later. To see how that year has gone for Team Dell'Anima, we spoke to managing partner Joe Campanale and chef Gabe Thompson:

How did you both get into the project? How did you first meet your partners? Joey Campanale: I was working at Babbo as a sommelier and our partners Bobby and August approached me and said that this space was opening up and that they were interested in opening up a restaurant with me. I said let me take a look at it, and I looked at it and it was perfect. August and I had worked at the Italian Wine Merchants together and were really good friends with Katherine Lahr (now Katherine Thompson). She was a private event coordinator and chef, and when we opened the restaurant we knew we could use her help.

Were you already planning on opening up a restaurant when you were at Babbo, or was this out of the blue? JC: I planned on doing it myself but years down the line. And how'd you find Gabe? JC: We were interviewing chefs and Katherine was like, 'I have the perfect idea. I had the perfect interview lined up.' And it ended up being her boyfriend Gabe. The first meeting was at Union Square Farmers Market. We had all of these interviews lined up, but we stopped looking.

And then for the opening how did that go? Were there any delays that you were not expecting? JC: The delays, they weren't so bad actually. There was the normal thing where the contractor says that he will do it four weeks, but it takes six weeks. We did it pretty quickly. You know it's a small space, so we didn't do too much to it, a lot of cosmetic changes. Whatever work we could do ourselves we did. Like Gabe was scrubbing the oven, and I was painting and sanding the chairs.

Were you slammed from the beginning or was it a gradual opening? JC: No, it was sort of unbelievable. We're so lucky. We opened the doors and we were really well received right from the beginning. We really weren't expecting that. We thought we would open up and slowly build up.

And in the beginning how did you come up with the menu? What were you envisioning? Gabe Thompson: Yeah, we kinda just threw some stuff on the menu. Chris who has been the sous chef forever, he started on the first day of friends and family. Once we started working together, the menu just kinda developed into what it became. It was just us working together and tasting the food. What is it like working in that tiny, hot kitchen? At the beginning were you like, I really don't know if I am going to be able to do this? GT: When we started we only had two people working and it was a little easier. It was harder because we didn't have days off, but it was easier because there's more space. As we got busier, we realized that we needed three people. With three people it's hard, you really can't move. It's not awesome.

What about the diners sitting right there? GT I try to pretend like they don’t exist. You just ignore them. GT: Unless I know the person, I try not to talk to the people. It just gets distracting. Do they try to talk to you? GT: Sometimes, but you can only ignore someone for so long. I try to do that thing where I pull my hat down real low so that I can’t see them. If I can’t make eye contact, then I don’t know that they are trying to talk to me. It’s not me being anti-social. It’s like there is no time to answer somebody’s question when people are waiting for their food.

Is that why it is further back at the new restaurant? Or is that just because of the design? GT: The design. JC: We have such good feedback. People are like “I love watching this.” But that also means that these guys need to do their work. I think that the open kitchen is one of the man great attributes of this place. It’s part of it. I love it. I love sitting up there watching it. The food that actually comes out of there always blows my mind how good it can be coming out of that kitchen.

Moving away from the menu a little bit, how do you improve the front of the house? We have gotten better at it. Hearing people’s feedback. I mean, when I first opened, I was 23 and had never run a restaurant before. I had eaten at every restaurant I possibly could. There was definitely a learning curve for me. What’s a big lesson you learned after running front of the house for a year basically seven days a week? JC: Maybe to take that seventh day off. I know that at the beginning, not taking days off at all was definitely wearing on me. But it’s hard not to in this industry, you just wanna be so, so good.

Do you guys take into account what people are saying about the food and service, what you read online or in the big papers? JC: Yeah, any sort of criticism positive or negative we really take to heart. I try to find out as much from guests as possible. We both just wanna be as good as we can possibly be.

GT: And I don’t think we have really been formally reviewed yet. We got one review in the New Yorker. Yeah, you guys haven’t gotten one from the Times yet. Do you think it's strange? JC: I am fine with it. GT: There is a part of me that thinks it’s maybe kinda cool. Like there are restaurants in the neighborhood that recently have been reviewed, and it hasn't been great. I'd rather not be. Why’s that? GT: I think that we are doing fine without them. I think it’s because we are a small neighborhood spot, that it’s not really necessary. Lupa has not been reviewed, maybe in $25 and Under once. And if it's good, you are going to get slammed even worse than you already are. JC: As it is, it is hard for me to get friends a reservation here. So there is almost no need.

Now L'Artusi, that will probably get some reviews. How did you go about the opening after the experience with Dell'Anima? Is it the same mentality?. GT: You learn from your mistakes obviously but I make new mistakes. Being in a bigger place I needed more staff. There are certain responsibilities I need to share with other people. Here I was pretty much by myself until a couple of days before we opened. Trying to wrap your head around a restaurant this big is difficult. Is it a totally different animal? GT: I'm trying to make it similar, the way I think about things, the way I do things, but it's almost too big to think about it in the same way. I'm still trying to treat it like a small restaurant and it's not.

And front of the house? Is it totally different? You have private parties now. JC: It's different in that there are more people. It may even be a little bit easier. We just have such great people helping out. And when did you guys decide you were ready to expand? When did you say, 'Ok, this is under control here.' JC: We realized that we needed more seats because we were turning away so many people every single night, and every person we turn away I feel bad about. So, about six months ago we said, we need to start looking. About early summer. We weren't actively looking, but the space came available, and like this space it was a great location that had so much potential.
· Previous Installments of One Year In [~E~]