The biggest event of the New York Wine and Food Fest is hands down the great Burger Bash. To get everyone appropriately pumped, we'll be interviewing the top contenders about their burgers, giving the odds on who we think will prevail, and oh, we'll be giving away two tickets. Stay tuned for your chance to go. 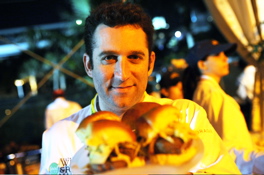 What's your strategy? I focus on doing the best that I can. My strategy is to just pull it all together and see what hits. I'll bring three or four others to help out.

What have you learned from the past competitions? I learned the importance of talking to the crowd and being part of it. People really want to hear what's going on and what you're doing. They want to know what your secret is, what's going into what you're making.

What will you be serving (any accompaniments)? In addition to the burger, I like to do cole slaw. It's kind of like a break. It gives a different texture; it's palate cleansing, like pickled ginger is to sushi. Particularly if you're using heat.

Are you you going to do anything differently this year? I made way too much chile sauce. And I learned something last year from Schlow. His incorporation of texture by putting scallions in the burger. I'm definitely going to adapt something from him.

And the moment we've been waiting for. Tell us about your burger. I was planning on doing a combination of griddled and grilled. You see, I believe there are two ways of approaching a hamburger. You can do big fat and juicy, which is great or it can be thin and it's all about the crust. When you're doing burgers in volume—and at the Burger Bash they ask each of us to make 1,000 burgers—you start on the griddle to create the crust. And then you slowly finish it on the grill. Also, if you're cooking onions on the griddle it imparts more flavor.

I'll be using ground beef and a combination of sirloin, chuck, and brisket, more on the fattier side. I'll use Jack cheese and double smoked bacon. I make a sauce with New Mexican red chiles, and, if i can get my hands on some green chiles, I'll add those on the griddle. And I'm going to get some texture by adding in some fried shallots. It's going to be more of a slider burger.

Sounds like a hot burger: The chiles themselves aren't excessively hot. They maintain a fruitiness and a smokiness and a dried cherry flavor and I'll add some smoky heat with chipotle.

Who are you worried about in the competition? Which is the burger to beat? There are so many great chefs involved. On any given day anyone can win, and it will come down to execution. Look at the line up. Everyone's hard core serious.

If you couldn't have your own burger, which burger would you eat? Balthazar's burger. Particularly when it comes to burgers I look for high integrity. I am such a personal fan of Riad and Lee. They nail it every single time. It's overlooked.
· BURGER BASH Presented by Blue Moon, Hosted by Rachael Ray [NYWFF]
· Eater Contests: Name This Dessert; Win Tickets to SWEET [~E~]