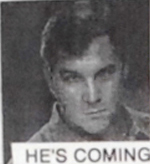 Like the change of the seasons or the systematic elimination of democracy at JetBlue, a rumor about the departure of one Frank Bruni, chief restaurant critic for the New York Times, surfaces every few months like clockwork. The latest iteration of the yammering, heard 'round the New York food universe this week, is that Brundog is leaving his post at the Times in as little as three months. He's gearing up to deliver and then focus on selling his book, so goes this rumor, plus his work here is done. Restaurateurs, let's be clear. No such luck. Mr. Frank, reached via phone, categorically denied that his departure is imminent and warned that if this business keeps coming up he might get comfortable for as much as another two years. Actually, that last bit is conjecture on our part, give or take. But, seriously: do not provoke The Bruni, people, or he will cut you. [EaterWire]