One Year In: Market Table

Share All sharing options for: One Year In: Market Table

Welcome to One Year In, a new feature in which Eater sits down for a chat with the chefs and owners of restaurants celebrating their one year anniversary. But not just any restaurants—those that were hyped and crowded, in some cases to the point of backlash. Now they have to survive with the rest of the pack. 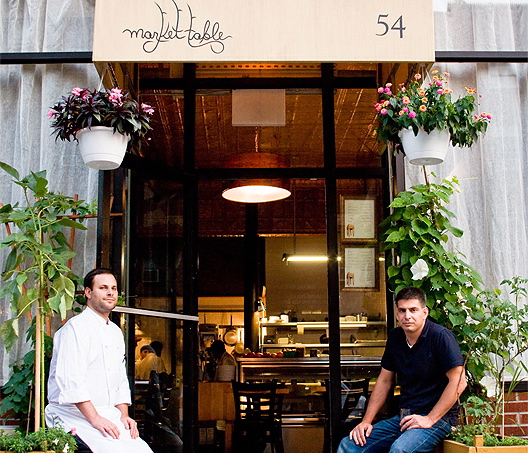 One year and one week ago, Joey Campanaro, Gabe Stulman, and Mikey Price opened Market Table in the former Shopsin's space. Due to the space, the team (Campanaro and Stulman were, of course, behind the rabidly popular Little Owl), and the trendy-at-the-time idea of selling market goods at the entrance (see Borough Food and Drink, BLT Market), there was just a bit of buzz surrounding the opening. One year later, the market is gone, there's a new private room, and while neither side will admit it, one of the partners is presumed out of the operation. Let's see how Price and Campanaro are faring right at the one year mark:

Why did you want to do the market at the outset? MP: I think really it was to create a closer relationship with the customer. We offered the same things that we did in the restaurant in the market. One stop shopping for meals to go home and cook. But financially speaking, it didn't make sense to have 50 people walk out the door because we didn't have seats.

JC: And the health department got really mad at us. They almost closed us down. We were an ass kiss away from closing the doors. What was their problem? JC: Some of the meals involved the Cryovac. First of all, it was really hard to find a Cryovac machine that we wanted. Then it was a big challenge to get the bags. And then we had to decide where the Cryovac machine would go. That was probably the biggest thing.

MP: I think we actually got two before we got one that actually worked.JC: There are certain regulations and we opted to say it's not worth it. The idea is totally worth it, because the people that did have the opportunity to get [retail meals] loved it and they were always coming back for more. MP: But it's a significant commitment to go through all those things you need to do to keep and use the Cryovac.

Would you say the market was financially unsustainable as well? MP: It was inconsistent. Once the health department came in and there was no more Cryovac-ing and we had to move the sink to a certain spot and relocate things...We never could get the clientele to really sustain financially what what is about a third of the space.

It seemed like a trend though a year ago. Borough Food & Drink, Marlow and Sons, etc. MP: It's a great concept, but to make a restaurant and a market work in the same location is a big undertaking.

Speaking of the restaurant's space, what's the story with the new room?
JC: That was a plan since day one, we just ran out of money. What was the delay? MP: In the grand scheme of things we would have started earlier but we had to revamp this room. So you just ran out of cash JC: It was all running a retail market and stocking the shelves. You can't look at a retail business in the same way as a restaurant business.

The space has evolved, but what about the menu. How has it changed? MP: I don't think there's one thing on the menu that's the same as when we opened. JC: Except the signature dishes. MP: Yeah, we're doing gnocchi but it's not the same gnocchi. I honestly feel like the menu keeps getting better and better each time that we change it.

And how do you decide how to alter your menu? Do online reviews, the big critics, etc. affect it? MP: It's more based on the seasons. We spend as much time as we can in the restaurant getting feedback, getting feedback from the service staff. Online reviews...I can't live or die by one review on Citysearch.

And looking at the Little Owl, how has the first year here been different for you Joey? Was it easier the second time around? JC: No. Each time is different. We've opened up a lot of restaurants together and separately and the biggest challenge here is my neighbor.

What's the problem there? MP: Noise. JC: It's an old building. The noise permeates. We love the energy...but unfortunately she's sensitive. It was eight months of "can you do this, can you do this." We paid for her hotel room one night. We were just like, "Go get a room." MP: Just recently over the last few months, we've slowly won her over. I don't know what we did...

You finally bought her enough food. MP: No, she never comes in. JC: I don't know exactly what it was, but what she needed the most was to know that the person affecting her was doing everything that they possible could.

How do you fix that situation? JC: One thing we did was we filled beams with fireproof insulation. With a space like this there are a lot of open beams, and it's especially noisy due to the tin ceilings. We made changes to the kitchen, we changed our sound system. The way we used to download songs, we would play them on our iPod and the volume levels were erratic. Now we put in a standardized computer system which balances the volume levels. And we change the types of songs.

How much do you think all of the changes cost you guys? JC: Just for her? More than four grand? It also cost us the closing too. MP: Closing, getting everything done in the kitchen....I think it's closer to eight or ten thousand dollars. JC: Yeah, we had to close for a day to sound proof the kitchen.

Any other neighborhood problems? MP: I think overall the neighborhood was very accepting of us. We took over the Shopsin's space, almost turning it into an opposite personality. People used to get yelled at and now you can come in and you can relax. It took us three months to prove that.

How did you decide upon this place originally? Was Shopsin's shuttered already, were you actively looking? JC: No, we were contacted by the landlord. We weren't looking for it. When we heard the Shopsin's space was on the market, it was interesting but it would be $300,000 just for demo and then you need money for people's salaries. I wasn't into that at all. But Mikey and I have always talked about opening a place one day.

And, you're both partners here? JC: Yes. And what about Gabe Stuhlman? JC: You're really going to have to talk to him about that.

Well, aside from him, has there been any major turnover here in the last year? JC: The hardest thing to get right was wine. There was this guy who also opened the Harrison, Peter Lucania. He has a really really strong wine background and we took him on to pull our program together.

In the beginning did you not have a wine program? JC: We had one; it just wasn't successful. We took him in about four months in. Four months in we said we really need to focus on this and get it to the level of where the food is. Number one, offerings and number two, presenting. It's still a work in progress. And the wine program we're getting into now is as seasonal and as value-oriented as the food, which in turn becomes profitable. This space in the front used to be all retail, and now it's all wine. We'd like to eventually have a private reserve and hold it down in the private dining room.

Has there been any kitchen turnover? MP: I'd say relatively little kitchen turnover. We had a sous chef in the beginning that didn't work out so we hired another sous chef about two months into it. But, I couldn't be more happy with the group of guys I have in this kitchen, great great guys.

Looking back, if you had to do it again, what would you do differently? MP: We would have raised a little more money. JC: We had a merchandiser that cost five thousand bucks. It was a little refrigerator right here. We filled it with prepared meals. But sales were so inconsistent they would always turn into the staff meal. If we were focusing on retail alone that would be fine. But we learned we had to stick to what we do best.

How do you make a restaurant like this sustainable for the long haul? Do you want to be here 10 years from now? JC: The original negotiated lease we wanted a 12 year lease and we wanted to add five more. The landlord said, wait until you've hit three years. He's a seasoned property owner, so he knew better. So we're in year one. If we get to year two, come back and ask again.