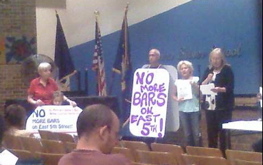 As usual, the neighborhood watchdogs came out in droves to last night's full Community 3 board meeting to oppose the latest threats to the neighborhood. Sasha Petraske's Mercury Dime and the Box bore the brunt of their criticisms:

1) The opposition to the Mercury Dime's app for a liquor license outshone The Box's. An army of naysayers brought plenty of signage to the public session. One man wore a sandwich board sign which read, "Enuf is Enuf!" The group presented a 4-minute speech in which they told the board that "the opposition has only grown" since the previous submission of an identical application in the same space.

Another member of the public spoke after the group presentation with the claim that their zip code has the 2nd highest number of bars of any zip code in the nation (he did not name which town held the top spot). The 500-foot law was thrown around again, but ultimately what sold the board was the presentation of more signatures from residents of East 5th, bringing the total number to 259. The board noted the amendment in their denial.

2) The owners of The Box showed to ask for an adjournment so they could negotiate with their neighbors. The board surprisingly agreed, tabling the decision until next month. One protester showed, claiming that the situation at The Box was "impossible to mitigate," citing lines and lines of taxis that circle the block at 5 in the morning. He added that there was no way to address that "unless you close The Box at 11."

3) Mercadito, whose reps were mysteriously absent at the SLA committee meeting, explained much like a college freshman to a professor that they "never received the email." They went on to describe how they've tried to appease the neighbors by removing an outdoor bench. The board, however, claimed they had a log of the lawyer's receipt of the email, and finalized their denial.
—Noah Adler
· First Word: The Box, Mercury Dime DENIED, and a Victory for Jason Hennings [~E~]