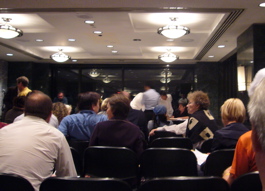 The full community board had a lot on its plate last night, as a whole swath of applications— from committee meetings in both August and September—were up for a vote after the August vacation. The community came out in force to strigently oppose or speak out in favor of applicants, and we have the regular assortment of big winners and losers. To the results:

1) Gatsby's got its final appearance before the board last night. And as expected, more people came out the reiterate their opposition to the noisy bar. And, also as expected, the board voted unanimously to deny their request for an alteration from a service bar to a regular bar (does not mean they are in danger of losing a liquor license).

2) The board handed down a deny unless stipulations are met for Keith Mcnally's new pizza spot on Bowery and Houston. Though the wording may suggest otherwise, this is actually a win for McNally. And the board quickly approved (and noted they were excited for) Andrew Carmellini's project on Elizabeth St.

3) The Beatrice was unanimously denied for a liquor license renewal with the board citing problems with the neighborhood and accusing the bar of a "bait and switch," since they originally applied as a piano bar but now operate as a nightclub.

3) There was some major community opposition to a new bar planned for 180 Lafayette Street with everyone from its residential neighbors to the head of a Children's Arts Museum showing opposition. The board voted unanimously to deny.

4) Bobo endured a tough two month campaign of community appeasement, but it looks like it was all worth it in the end. The community agreed with the committee's earlier decision to allow them to add a service bar and four seats if they amend their certificate of occupancy with the DOB.

5) After the Travertine, one of the most heated debates of the night came for a gastropub hoping to open at 47 West 8th St.. The SLA licensing committee approved the application, but many in the public session pleaded for the full board to overturn the resolution. Yet, a fair number of people came out to speak in favor of the applicant, the first speaker being a licensed tour guide who said that on tours, his company tells visitors that 8th street "is going to be the new restaurant row." In the end the board voted to agree with the committee's resolution and approved the restaurant.

6) A spot going in at 296 Bleecker (d.b.a 296 Sandwich) had its application tabled. It seemed like the request is for a license at the second floor bar but they would be serving liquor at the Five Guys downstairs too. The board suspected this was a tricky way for the Five Guys owners to serve alcohol without getting on the application.

7) A request by Soho Park to get a liquor license for their sidewalk/outdoor cafe (instead of just a beer and wine license) was unanimously approved by the committee and so was approved by the board.

8) Spread NYC was given a quick denial, based on earlier community opposition to their "European" floor-to-ceiling windows and because they would be converting a retail spot into a restaurant.
· First Word: Gatsby's The Loser, McNally on Top with Community Board 2 [~E~]
· First Word: The Neighbors Rally Against Beatrice, Hanson and More at Epic CB2 Meeting [~E~]