First Word: The Box, Mercury Dime DENIED, and a Victory for Jason Hennings

Share All sharing options for: First Word: The Box, Mercury Dime DENIED, and a Victory for Jason Hennings 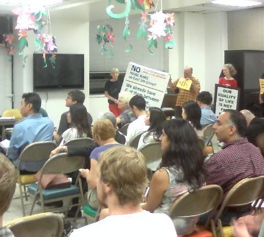 Last night, Community Board 3 held an especially long and contentious SLA Licensing Committee meeting that lasted well into the wee hours this morning. We're going to sum up the major decisions here, but the meeting was so absurd that we'll be posting little snippets of the most ludicrous discussions and batshit crazy outbursts later, so stay tuned. For now, The Box, Mercury Dime, the EU, and Seymour Burton:

1) First up, we have a striaght up denial for a renewal ap for The Box. The residents from the building next door arrived en mass to complain about noise and report they get carded going into their own building. The community board cited 18 months of noise complaints and stated that the Box was operating as a club and a cabaret instead of what it originally stated it would be, a dinner theater. To this the owners replied that the space is, in fact, a dinner theater but some people simply choose to have dinner at two in the morning (which of course incited general outrage from the crowd). The owners will have a second chance to appeal before the full board later this month before their application goes to the SLA.

2) At about midnight, Mercury Dime saw weary 5th Street resident opposition. The crowd was thinner than originally expected, given the late hour, but there was wide acknowledgment of the current and unfortunate state of the street (20+ liquor licenses within 500 feet of MD's space) and the impending threat of the Cooper Square Hotel. The board members were tired, but a majority still managed to vote a motion to deny the beer/wine license for Petraske and co.

3) In a startling turn, the board members voted with a motion to approve—and positively fawned over—Jason Hennings and his E.U. (which needs approval to extend their current liquor license onto the new sidewalk seating). Given Hennings' initial problems with the nabe when he was first setting up shop on East 4th Street, it's interesting that the angry neighbors have finally come around.

4) And that wasn't Hennings' only victory. It turns out he is the new Seymour Burton partner we mentioned yesterday, and he appeared before the board to transfer principal ownership from former partner Adam Kushner to himself. Hennings made a presentation to the board about his planned "East Coast Seafood" restaurant, making numerous references to how disgusting and unlawful the former space was ("It's amazing that the place hasn't burned to the ground"), and was approved for the transfer of principal ownership on the license with the stipulation that the new raw bar/bar he plans won't be more than 15 feet.
Reporting by Monica Padrick
· The Drying of NYC: The Mercury Dime Showdown [~E~]
· First Word: Gatsby's The Loser, McNally on Top with Community Board 2 [~E~]