Who Goes There? Gene’s Restaurant

Share All sharing options for: Who Goes There? Gene’s Restaurant 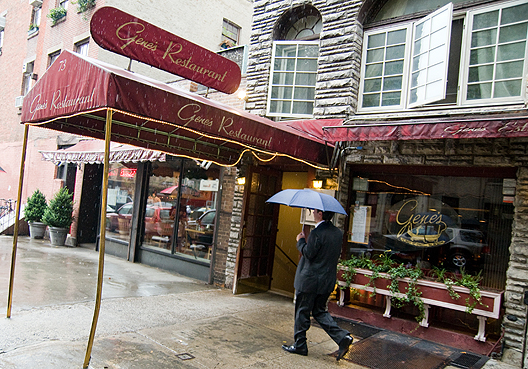 Any restaurant in the city would kill to have the Wednesday night crowd Gene’s packed in recently. Just two days after Labor Day and there was hardly a table free in the Greenwich Village oldtimer. Pretty good for an Italian standby that has been sailing along under the media radar for nearly 90 years. Who are these people? “Ninety percent regulars,” said my waiter. “Some people who live in the neighborhood, some people who used to live in the neighborhood. Same old faces.”

Those faces seemed to know each other, as well. Friendly foursomes filled the long, low-ceilinged dining room. Also making a good show were comfortable couples of both the straight and gay variety. One of the most voluble parties was a quartet of aging gay stage types (including one fairly well known theatre critic) with graying heads and glasses telling hoary stories about ancient theatre feuds, why Richard Harris didn’t have a better film career, and the glory days at London’s Royal Court Theatre back in the 50s.

From the looks of old postcards featured on the restaurant’s website, Gene’s hasn’t changed much. Bar up front, long mirrors on the walls, four straight rows of tables, with the tables in the center two rows set at angles. And according to various framed articles from the past, the menu hasn’t changed AT ALL! Same Clams Oreganata. Same Veal Milanese. Same Stracciatella. These dishes are prepared not with any particular inspiration, but dependably. My Chicken Arrabiatta with Hot Peppers and Sausage may have lacked personality, but it satisfied. The chilled metal serving dish of tough, iced crudités brought nothing to the meal except the question of why even the most traditional joints still lug out these useless, tasteless extras.

Comfort is the main selling point here; friendly, familiar service and the cozy quasi-grandeur of the dining room—not to mention the snug bar, which I imagine would make an ideal harbor on a snowy winter evening. I met one of the Ramirez family, which has owned the place since 1992 (and owns the 11th Street building the restaurant occupies), within seconds and he was kind enough to spend five minutes personally guiding me through the menu. Bobby Flay probably wouldn’t do that for me.
— Brooks of Sheffield
· Previous Installations of Who Goes There [~E~]