First Word: Gatsby's The Loser, McNally on Top with Community Board 2

Share All sharing options for: First Word: Gatsby's The Loser, McNally on Top with Community Board 2 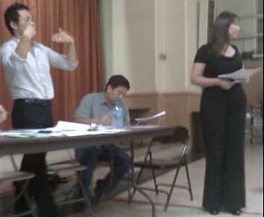 St Anthony of Padua's Lower Hall housed both CB2's SLA Licensing meeting and several voting booths last night. So the committee tried to keep the normally raucous meeting somewhat more contained by distributing "speaking cards" to those members of the public who wished to voice their support or outrage. Nonetheless, the night started off with a bang:

1.) Gatsby's, the sports bar at 53 Spring Street, was requesting an alteration from a service bar to a regular bar. Last month they had a difficult time with the public, and last night's meeting was no different. A woman brought forth her toddler daughter and begged the committee to deny their application. A college-aged kid spoke out against Gatsby's, citing his bar-hopping experience. The list of complaints seemed endless: public drinking and fighting, patrons taking the fire exit and milling around the neighboring building's hallways, and being an overall "assault on the neighborhood." The committee denied them outright and resolved to include a statement to the SLA citing Gatsby's various violations. And yes, the people behind Gatsby's included the previously reported petition with their application - with 150 signatures.

2) Keith McNally made a triumphant return after a particularly messy meeting back in July. Since then he has made significant progress with the community and, even more importantly, has signed the lease. He compromised on the issue of open doors, agreeing to close them at 11 during the week and midnight on weekends. McNally was happy with the progress he'd made, joking, "If I had people complain about me like they did Gatsby's, I'd shoot myself."

As far as the food goes, he's moving forward with the pizza concept. He told us that he wants to have a woodburning oven and will include rotisserie and grilled fish on the menu. Major plus: the proposed delivery window made it through the negotiations. When asked when he would be ready to open, McNally guessed "a year if I'm lucky," but projected a winter 2010 opening. The committee also denied the proposal pending conditions regarding soundproofing, but the vice chair told us McNally would most likely deliver and get approved during the full board meeting.

3.) After being on the agenda four times, the community finally heard from Spread NYC. The concept of Spread appears similar to Le Pain Quotidien, with one important exception: beer and wine. The menu of open-faced sandwiches sparked one member of the public to call the place a "snack shop." The committee heard these concerns and focused mostly on the issue of the "European concept" of open floor-to-ceiling windows. Said vice-chair Richard Stewart, "If you want the European concept, you're in the wrong neighborhood." Spread NYC was ultimately denied, though the committee resolved to compromise should the owners agree to keep the windows shut.
—Reporting by Noah Adler
· First Word: More Details on Carmellini Project Revealed [~E~]