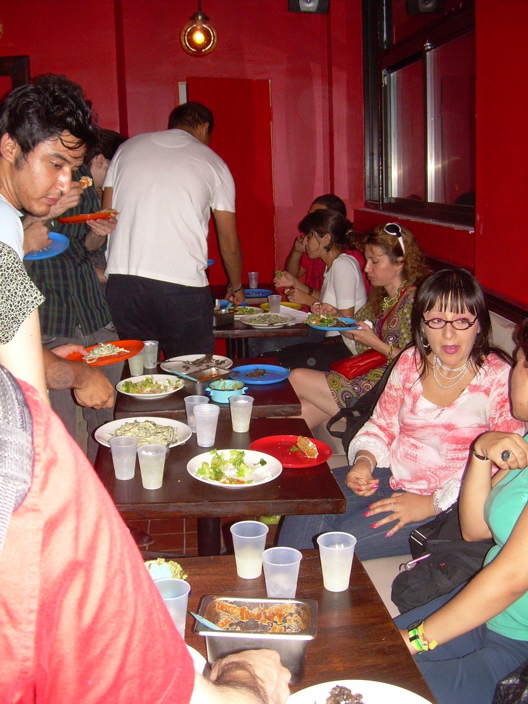 1) Upper East Side: Finally late night drunks and gluten-free enthusiasts can unite at a new pizzeria called Opus, opening this week according to NYMag. They write: “Opus, the new pizzeria-gelateria-ristorante from Giuseppe Lentini (late of Tini’s and before that Lentini), will serve its gluten-free pastas and pizzas until 5 a.m. seven days a week...Opus will also cater to those unallergic to wheat or grains, as well as non-insomniacs, with a raw bar, a bar-food menu, signature cocktails, and a wide range of salads, appetizers, and entrees..." Status: Unknown. No answer to calls. 1574 Second Avenue; 212-772-2220. [NYM]

2) Williamsburg: Brooklyn Paper reported on Thursday that the plywooded La Superior was already open as of July 25th and shared the following info: “The food is 'truly Mexican, without any pretense,' according to owner Iris Avelar, and ranges from savory snacks...to entrees like 'pollo encacahuatado...' However, Brownstoner reported on the same day that it was to open today, August 4th. Meanwhile our sources have a first hand account of the opening night party on Friday the 1st. (Note the scene from said party in the pic above.) Regardless, the joint’s definitely open. Status: Certified Open. 295 Berry Street, Williamsburg; 718-388-5988. [BP, Brownstoner]

3) Flatiron: NYMag also reports that Alain Allegretti’s eponymous eatery, Allegretti, will open this week in the former Arezzo space. The details are as follows: “The Nice native plans to cook whole fish in a wood-burning oven, and Provençal-inspired fare that reflects his childhood and culinary training under such luminaries as Jacques Maximin, Alain Chapel, and Alain Ducasse. Expect refined versions of classics like a quail-egg-enhanced niçoise salad, ravioli stuffed with oxtail and chard, a pan bagnat at lunch, and jasmine semifreddo for dessert." Status: Not Open. Opening Next Monday 46 W. 22nd Street; 212-206-0555. [NYM]

4) Midtown: And now for our chain restaurant update, Midtown Lunch is reporting that Church's Chicken has opened in a food court in midtown. Then he waxes nostalgic a bit about the genre: “I’ll admit, I don’t think I’ve ever eaten at Church’s. I was always a KFC fan growing up, a Popeye’s fan later in life (after spending so much time in New Orleans), and I had a brief flirtation with Bojangles in 1986. But never Church’s. Anybody a big fan? “ Status: Certified Open. 705 8th Avenue; 212-315-9600 [Midtown Lunch]