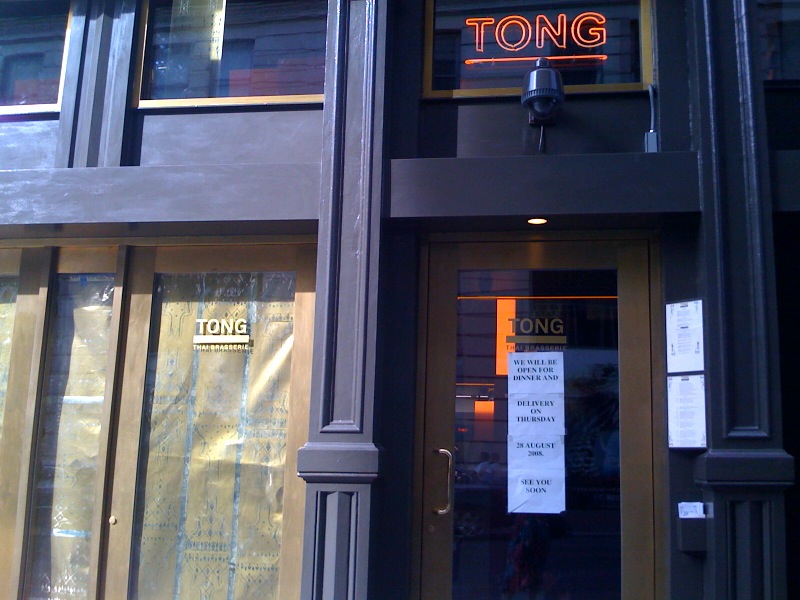 1) Red Hook: Neil Ganic’s long-awaited reopening of La Bouillabaisse is reportedly happening this week according to TONY. Here’s the lowdown: “The first Bouillabaisse was a neighborhood pioneer when chef Neil Ganic opened the restaurant on Atlantic Avenue in the ’90s; it later briefly occupied a space on Union Street. Now, Ganic reprises the original menu in Red Hook, next door to his new bar, Annabelle’s." Status: Unknown. No answer to calls. Ganic first said he would open back in June so we'll need an eye witness before we certify it open. 44–46 Beard Street; Red Hook, 718-643-2679. [TONY]

2) Chelsea: File this one under "gimmicks, etc." NYC will get its first branch of chain Rock-n-Sake this week according to TONY. They write: “Joseph Ulloa, once a regular at the Port Washington branch of this New Orleans Japanese restaurant, brings the chain to NYC with partner Richard Volpe. Sushi chefs stand sentinel behind a white-marble bar anchoring the 2,800-square-foot space. If the selection of nouveau rolls—like the Hawaii 5-0 (coconut-battered shrimp, cream cheese, mango and avocado)—is too dizzying, take a breather in the high-design restrooms, where Jackie Chan flicks are projected on the floor. Status: Not open. Opening in the first week of September, according to their PR. 138 W 25th Street; 212-255-7255. [TONY]

3) East Village: Bottomless Dish has the scoop on the opening of Tong Thai Brasserie which features signage indicating it will open today. They write: “The space looks nice and the menu is interesting and quite affordable, with small plates (like fried squid, smoked chili soup and pencil spring rolls) ranging from $5 to $7, and larger plates (like blue swimmer crab fried rice) weighing in at $9 to $14. Tong will also be delivering between 23rd Street and Bleecker Street, from 7th Avenue to 2nd Avenue. The restaurant will begin serving lunch daily sometime next month.” Status: Not open. They will have their grand opening on Sept 4. 39 E. 13th Street; 212-253-2696. [Bottomless Dish]

4) East Village: Update: We reported on Monday that the long-delayed Black Iron Burger Shop was not open despite reports from NYMag and others. A tipster today reports: "Jason at Black Iron told me they were opening Thursday. When I was there Tuesday they were fixing some problem with the beer tap." Status: Due to this tip and the NYS report, we say all signs point to an opening tonight. No answers to calls. 540 E. 5th Street; 212-677-6067. [Eater Inbox]